PM: Brits abroad for 15+ years to get UK right to vote 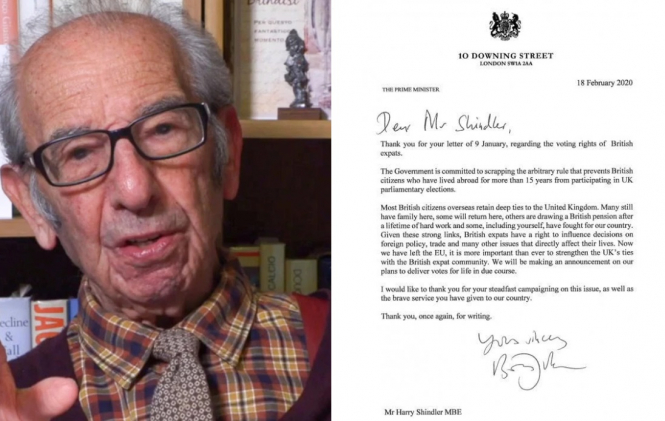 Mr Shindler MBE, who is 99, has been campaigning on this issue for more than 20 years
By Connexion journalist

The British PM sent the letter to long-time campaigner Harry Shindler MBE, a 99-year-old British citizen who retired to Italy, where he currently lives.

Mr Shindler has campaigned for more than 20 years for British nationals living abroad to have the right to vote in UK elections, even if they have lived outside of the country for more than 15 years.

The letter, which was sent on headed paper from 10 Downing Street and signed by Boris Johnson, read: “The government is committed to scrapping the arbitrary rule that prevents British citizens who have lived abroad for more than 15 years from participating in UK parliamentary elections.

“Most British citizens overseas retain deep ties to the United Kingdom. Many still have family here, some will return here, others are drawing a British pension after a lifetime of hard work and some, including yourself, have fought for our country.

“Given those strong links, British expats have a right to influence decisions on foreign policy, trade and many other issues that directly affect their lives.

“Now we have left the EU, it is more important than ever to strengthen the UK‘s ties with the British expat community.

“We will be making an announcement on plans to deliver votes for life in due course. I would like to thank you for your steadfast campaigning on this issue, as well as the brave service you have given our country.”

The letter was sent to Mr Shindler after he wrote directly to the PM on the issue.

Mr Shindler had previously taken his campaign to the High Court in London, and the European Court of Human Rights, without success.

Even so, the policy of giving all British British expatriates the vote - eventually - was listed in the last three Conservative Party manifestos and in the last Queen's Speech supporting documents.

In response to the letter from Mr Johnson, Mr Shindler said: “This is a great victory for all of us patriotic Brits who have campaigned for years to get the vote back. I just hope I can make it to the next one given that I’m 100 soon.”