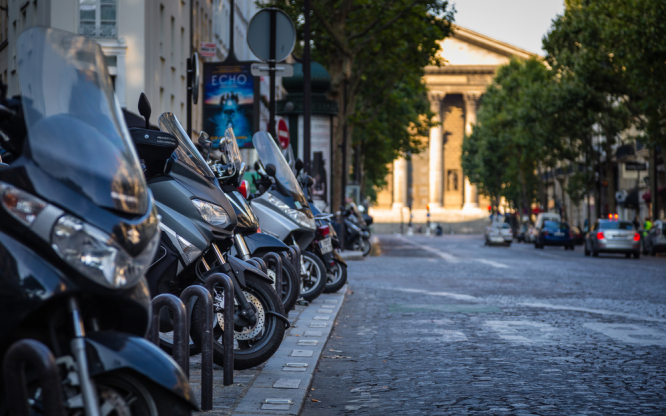 Fees will be €3/hour in the city centre and €2/hour in outer arrondissements for motorbikes and scooters Pic: Oleg Anisimov / Shutterstock

Parking a car in a space on the street in Paris will cost 50% more from August 1, and fees for parking non-electric motorbikes and scooters are set to be introduced from 2022.

In the bois de Boulogne and Vincennes parking fees for cars will be introduced in autumn.

Drivers who have a Paris resident’s card will be exempt.

The changes were announced yesterday as part of vast parking reforms being brought in by Mayor Anne Hidalgo.

They will be submitted to the Conseil de Paris at the beginning of July, where they are expected to be approved.

It is hoped that increasing prices will help reduce air and noise pollution caused by vehicles, and create more public space for pedestrians and cyclists.

Some members of the centre-right Les Républicains (LR) party are against the idea. Nelly Garnier, elected representative in the 11th arrondissement, said: “Once again Paris raises taxes to try and chase away cars.

“But this aggravates traffic jams and just pushes pollution out to the suburbs.”

Change for motorbikes planned for years

The idea of charging for parking motorbikes and scooters was put forward by Ms Hidalgo in 2014, but rebuffed by LR politicians and motorbike lobbies.

Since then, neighbouring communes Vincennes and Charenton (Val-de-Marne) have introduced the measure.

The proposed law in Paris, now coming in 2022, will mean motorbikes and scooters have to pay to park in roadside spots that are reserved for them.

“Not everyone can come into Paris on a bike.”

But David Belliard, deputy mayor for transport in Paris, defended the new measures. He said: “Noise and air pollution come at a cost for the community.

“They need to be managed by those who are responsible for them. That is the idea of the rules we are putting in place.”

The new prices come as part of widespread changes to how private vehicles are used in the capital.

Traffic has been falling for some years, meaning there is now less need for parking spaces.

The mairie now wants to encourage drivers to use underground parking, allowing it to reduce street parking by 50%.

Space on the street can then be used for other purposes such as enlarging pavements, adding cycle lanes and creating terraces.

Mr Belliard said: “From now on it will be much cheaper to park underground than in the street.”