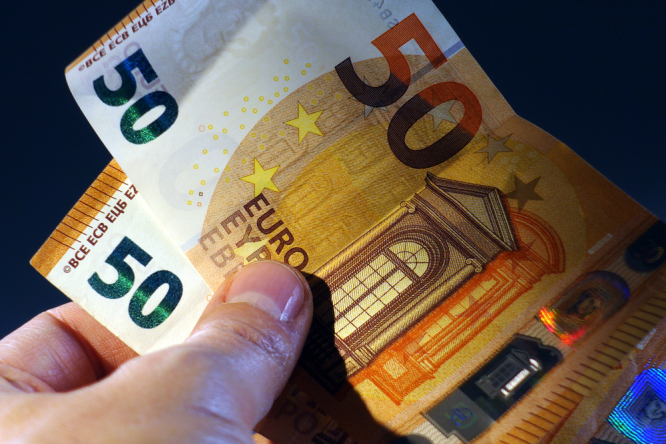 Police said that there are a number of ways to detect if your notes are fake, including checking numbers of the small print, and irregularities in the colour of the ink Pic: D-VISIONS / Shutterstock

Police in southeast France are warning against the circulation of fake €20, €50 and €100 notes, especially in the Côte d'Azur.

The fake notes are thought to originate in Italy, and have been purchased online. They are generally found on €50, but have increasingly been found on €20 and €100 notes too.

Jérôme Vial, head of the economy and finance division of the Nice police, told Nice Matin that the spread is especially worrying for shopkeepers so close to Christmas.

The notes are undetectable as fakes by the pens often used by shopkeepers to detect false money, but Mr Vial said that there are some clues to their fraudulent status.

He said: "You have to take a good look at the changing ink on the number. On these counterfeit notes, the ink is fixed.”

It comes as a record 130,000 fake banknotes were seized last month in Paris, and a Senegalese citizen was taken into custody for alleged “circulation in an organised gang of falsified or counterfeit money”.

Similarly, in May this year, a group of 10 people were arrested for their suspected role in a fake euro banknote trafficking network in which they sold at least €300,000 of counterfeit bills.

How to spot a fake banknote

The recommended way to test if a banknote is authentic is the 'feel-look-tilt method'. You can also use special pens or devices that retailers often use.

The feel-look-tilt method is one you can apply easily at home. The banknote should feel crisp and firm. When you look at it against the light, the portrait window, the watermark and the security thread should become visible.

Finally, as you tilt the note, the image on the hologram and the colour-changing number on the back of the note should change.

For a more detailed breakdown of the feel-look-tilt method, you can check the European Central Bank’s website here.