President Macron to give Covid update in TV speech on Tuesday at 20:00 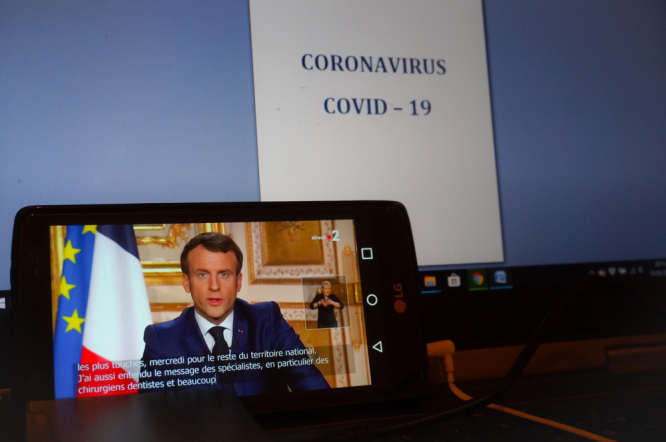 President Emmanuel Macron last gave a televised speech about Covid on July 12, when he announced the introduction of the health pass Pic: Spech / Shutterstock

President Emmanuel Macron will give a televised speech at 20:00 on Tuesday (November 9) when he will in part address the Covid situation, which is slowly worsening in France and more dramatically affecting other parts of Europe.

During the last televised speech in which the president addressed the country, on July 12, he notably announced plans to introduce the health pass (pass sanitaire). He promised during the speech that he would again address the public about Covid at a later stage.

Mr Macron’s speech could include measures such as making a third Covid vaccine dose mandatory for the most fragile in society, a government source told RTL.

France is currently offering booster doses, six months after the second dose, to:

It is not yet known if the president will announce a more general booster dose campaign to target the rest of the population.

The Haute Autorité de santé, which provides expert opinions and analysis on health matters to the government to help inform political decisions, has not yet been asked by the government to examine the idea of a general booster dose campaign, Franceinfo reported.

France has recorded an average of 5,930 per day over the past seven days, an increase of 9% compared to the previous week.

On November 5, 8,998 positive cases were recorded.

The positivity rate, which is the proportion of tests that are positive out of all tests taken in a day, is 2.4%, up from 1.8% last week.

In the past week, an average of 68 people per day have been admitted to intensive care units due to Covid, an increase of 10% from the previous week.

There has also been an average of 33 deaths due to Covid in hospitals in the past seven days, an increase of 14% compared to the previous week.

Read more: Masks to be required again in primary schools in 39 French departments

The European Centre for Disease Prevention and Control (ECDC) has said that across the European Union and European Economic Community (EEA), which includes 30 countries, the overall Covid situation is characterised by “high and increasing” case rates and a “low and stable” death rate.

This is from its latest report based on figures from the final week of October, and published on November 4.

“This rate has been increasing for four weeks,” the ECDC states.

The 14-day Covid death rate was recorded at 27.2 deaths per million people, a number that has remained stable for two weeks, the ECDC reported.

Cyprus and Italy are considered as “of low concern” and Malta and Spain as “of very low concern”.

The booster jab campaign is continuing in France, with numbers high among people aged 65 and over, but less encouraging among those with other underlying conditions, reported Le Monde.

As of November 1, three million people had received a booster dose, which is not yet even half (43%) of the eligible population – namely, people aged 65 and over and living at home. Among elderly care home residents, 74% have had a booster. Yet, only 19% of those with underlying conditions have done so.

This discrepancy is “hard to explain”, said Jacques Battestoni, president of the MG France union. He said: “Younger patients with underlying conditions seem to have, [wrongly], less awareness of the danger.”

Authorities are reportedly considering whether, or when, to roll out the third vaccination campaign to a wider proportion of the population.

Read more: Why France is no longer using Moderna for Covid booster jabs

Read more: Moderna approved by EU as booster jab, one week after France stops it

Currently, the criteria for a third jab include being aged 65 or over, with an underlying condition, and having had your second vaccine dose at least six months ago.

Professor Alain Fischer, head of the government’s vaccine strategy, said: “At the moment, we are clearly falling short of our final objective. To ensure optimal protection of vulnerable people, we need to reach a booster coverage of 90%, perhaps even more.”

He said that it is difficult to explain to people why, when they have already had two doses, they may also need a third.