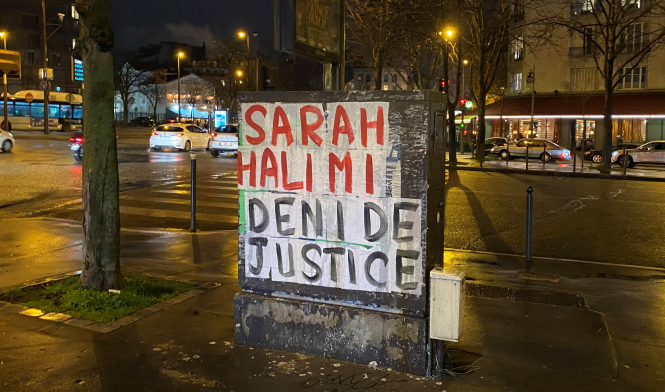 More than 20,000 people were estimated by police to have demonstrated in Paris yesterday over a legal decision not to try a man who killed a Jewish woman because of his mental state after smoking cannabis.

A further 6,200 people demonstrated in cities outside the capital, according to official estimates.

It comes as President Macron has called for a change in the laws on legal responsibility.

The case dates from 2017 when Kobili Traoré, who lived in an HLM council block in Paris’s 11th arrondissement, broke into the third-floor flat of his 65-year-old Jewish neighbour by climbing onto her balcony via a next-door flat belonging to friends of his before attacking her and throwing her off her balcony to her death.

The victim, Sarah Halimi, an orthodox Jew, was a retired doctor, and the attacker is a Muslim who, according to the prosecution frequented a hardline Salafist mosque.

The prosecution stated relations between the families were poor, with a sister of Traoré having previously insulted Mrs Halimi, calling her a ‘dirty Jew’.

However Mr Traoré was known to be a heavy cannabis user and psychiatrists involved in the investigation into the case concluded that at the time of the attack he was undergoing an 'acute delirious surge' sparked off by having consumed the drug.

Investigating judges concluded that a crime of an anti-Semitic nature had taken place, however that Mr Traoré was not criminally responsible at the time as a result of his mental state, so should not be tried.

He was however ordered to be placed in a secure psychiatric facility indefinitely [according to Le Monde, this would be until a panel of psychiatric experts deem he no longer poses a danger] and was put under an order of 20 years of 'security measures', including not having any contact with the victim's family or returning to the scene of the crime.

The decision regarding his lack of legal responsibility was confirmed this month by France’s top appeal court Cour de Cassation, leading to the protests.

The finding has been widely criticised and President Macron told Le Figaro: “To decide to take drugs and to ‘go mad’ in some way as a result, should not in my view remove your criminal responsibility.

“I want the justice minister to propose a change in the law as soon as possible.”

Speaking at the Paris protests yesterday the president of the LREM group of MPs in parliament, Christophe Castaner, raised similar criticisms, saying: “There is a gap in the law and we have to change the law.”

It comes as the lawyers for the victim’s family have stated they will take a case to court in Israel against Mr Traoré, as the country reserves the right to pass judgement when a Jewish person is killed in circumstances involving antisemitism.

The Grand Rabbi of France, Haïm Korsia, also denounced the situation in a piece in Le Figaro, saying: “Either the murder is anti-Semitic, and therefore thought-through, or it is an irresponsible act and therefore done without thinking. Yet the investigating judges recognised it was anti-Semitic.”

Cour de Cassation public prosecutor François Molins has denied claims by some of those protesting the decision that it amounts to ‘a permit to kill Jews’, stressing that it was only the fact of the attacker's lack of understanding at the time that meant he was found not responsible, not merely that he had smoked cannabis.

He added that, since a 2008 legal reform, judges always first pronounce on the existence of a crime and whether it can be attributed to the accused, and only afterwards as to whether the accused was criminally responsible.

Prior to this it was considered that no crime occurred where someone was found not responsible due to their mental state, which was distressing to victims, he said.