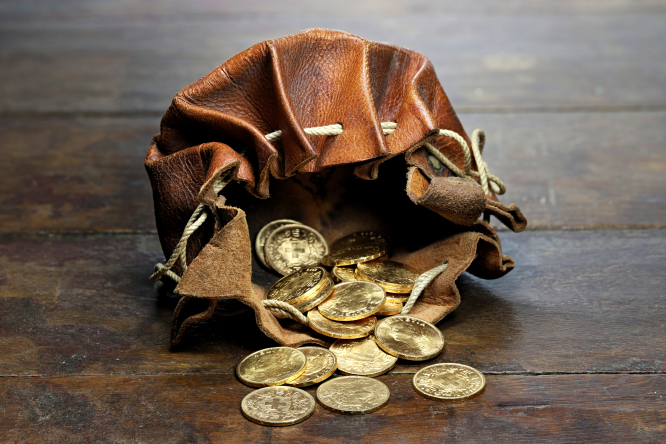 The rare gold coins were discovered in a manor house in Brittany, during a construction project (photo for illustration only) Pic: Bjoern Wylezich / Shutterstock

Hundreds of 17th century gold coins were among 200 pieces of treasure, valued at €300,000, found by artisans working at a Breton manor house, and are to be sold at auction on September 29.

The proceeds will be shared between the owners and the three workers who discovered the items.

The men were working on a construction project at the house in Finistère when they made the discovery in 2019.

They first found 154 coins in a metal box, hidden inside a wall; and then three days later came across the 239 gold coins, dating from the 17th century. They also discovered 85 gold coins in a purse, Le Télégramme reported.

The property owners alerted the mayor of Plozévet, in Finistère, who in turn alerted the regional prefect. This is a legal obligation on the discovery of ‘treasure’ in France, as mandated by the Culture Ministry.

Expert analysis of the findings revealed that the pieces date back as far as 1638-1692, with a value of up to €300,000. The coins were minted in 19 different cities, and one is especially rare.

This is the ‘double Louis d'or’ also called ‘à la mèche longue’. It was minted in Dijon in 1646, Le Figaro reported, and there are only 120 examples of it in the world.

Auction house La Maison Ivoire in Angers will be in charge of the auction of these coins, which is set for September 29.

Auctioneer Florian d'Oysonville told Le Figaro: "This discovery is really very rare, especially as the most recent pieces of the treasure were hardly ever in circulation.”

Ownership of ‘treasure’ in France is defined by Article 716 of the Civil Code.

“Treasure is any hidden or buried thing over which no one can justify ownership, and which is discovered by pure chance.”

One of the workmen who found the cache is a ‘Compagnon du devoir’ craftsman, the auction house said.

This is a status reserved for young apprentices from the age of 15, or after the baccalaureate (taken at age 18) to train them in traditional trades, such as carpentry or joinery.

It can also include trades such as baker or cobbler.

During their training, these apprentices complete a ‘Tour de France du compagnonnage’ (an apprenticeship tour’) and are taken under the wing of existing craftsmen to shadow their work and learn from existing experts. The training is known to be demanding.

The owner of the manor, François Mion, said he is happy to share the spoils of the treasure with the workers who found it on-site.

He said: "This should give them a definite helping hand.”

9 hours ago
5
Map: in which French departments are Covid cases rising?