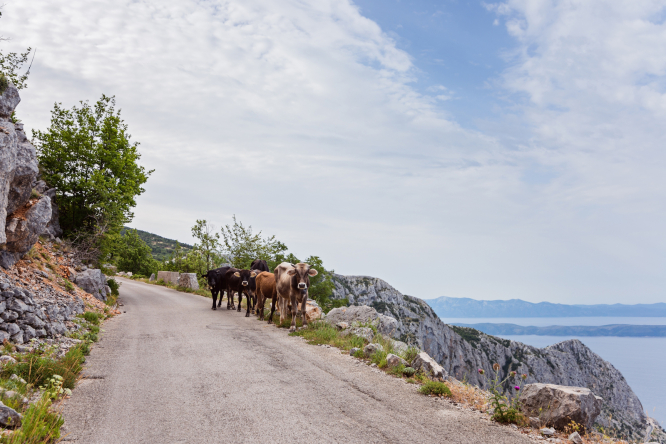 This summer, it was reported that beaches on the island had been closed to prevent wandering livestock Pic: Daniel Jedzura / Shutterstock

The growing number of free-roaming cows in Corsica may be due to fraudulent claims for EU agricultural grants.

This summer, it was reported that beaches on the island had been closed to prevent wandering livestock, emboldened by the lack of visitors during the Covid lockdowns, attacking tourists.

In fact, cows have wandered through the local streets and gardens – and sometimes even houses – for some time.

The head of Corsican agricultural development body Odarc has estimated there are 15,000- 20,000 ‘wild cows’ on the island, thought to be a combination of wild herds and cows left to roam by owners.

Local newspaper Corse Matin claims residents are afraid to leave home due to the cows and forbid children to play outside.

One mayor said “if this goes on, there will be deaths” after a 70-year-old was injured by a cow while hanging out her washing.

The animal had no ear tag and so did not officially belong to anyone.

Speculation as to why this happens centres around alleged abuses of EU farming grants.

Between 2014 and 2015, France and the European Commission agreed to re-evaluate farm grants allocated to Corsica, from €95 to the French national average of €220 per hectare, despite the fact that productivity on the island is lower than average.

An Anticor spokeswoman told The Connexion that in 2016 it flagged up to the European Anti-Fraud Office (Olaf) cases of farmers – and non-farmers – claiming plots of land where ownership was unclear, or encroaching on land owned by others to let cows wander over them and claim subsidies.

Olaf in turn noted in a 2018 report: “Some farmers have engaged in a race for spare hectares, maximising the surfaces for which they can claim subsidies, without having the material means to put them to good use, nor the consent of owners.”

The Anticor spokeswoman added: “On one hand, someone can declare themselves as a farm owner without farming even the smallest bit of land, and on the other hand, a claimant can benefit from subsidies without demonstrating they have a right to use the land.

“There is rarely any investment in fencing, which means that the animals wander off.”

In 2018, Corsica’s anti-fraud department, Codaf, carried out checks on the 10 biggest local beneficiaries of the EU’s CAP subsidies and found four examples of suspected corruption relating to the family of the then director of Corse-du-Sud’s chamber of agriculture.

It found that he and various relatives had been claiming €400,000 annually for 600 hectares and 530 cows since 2015. Inquiries suggested the number of cows had been inflated by “at least 50%”.

The accused deny wrongdoing and delayed court proceedings are now set for next April.

In July, four members of another family from Lucciana were called to court over some €750,000 in EU subsidies received from 2015-2019.

They were accused of making false declarations about rent, as well as the births of calves.