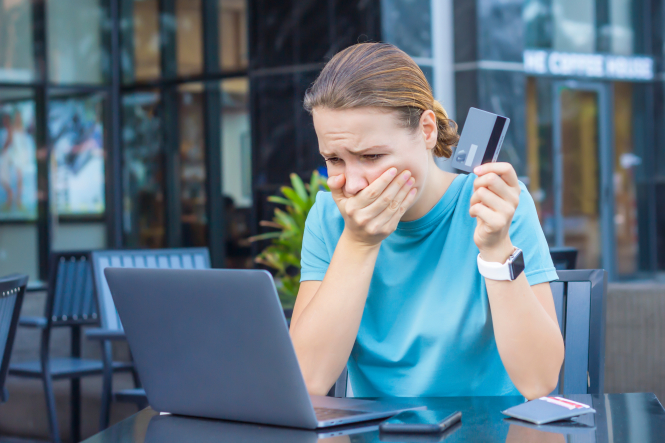 Watch out as online fraudsters have a new ruse: setting up false websites of physical shops or brands you may know in a bid to con you out of money Pic: EugeneEdge / Shutterstock

Online fraudsters have a new ruse in France - setting up false websites of physical shops or brands you may know in a bid to con you out of money or implant destructive software on your computer.

"This is one more frontier that cybercriminals have just crossed: it is no longer simply impersonating an already existing entity via a scam email or text but usurping the whole identity, even on Google, of a physical brand, manufacturer, craftsman, amongst others," said Laurent Amar, co-founder of France Verif, a French firm specialising in software to fight online fraud.

Scammers manage to do this by hijacking the Google records and phone numbers of businesses that have physical shops and are trusted by consumers.

Shoppers (not knowing that they are using a fake website impersonating a shop or business they know) then enter their credit card details (which are then stolen) or import infected software programmes onto their computers.

"Fraudulent sites are nearly undetectable to the naked eye, even for the most experienced," Laurent Amar told Le Figaro on October 15.

"Even if the sites in question disappear quickly, they have time to do significant damage both to the victims and to the reputation of these businesses, which are generally not aware of them quickly enough to be able to react," he added.

Recently, this type of scam mainly concerned bed and breakfast outlets or the sale of insecticides, he said, adding that now all businesses are potential victims, large or small.

These scams are based on two preconceived notions which consumers put trust in: online reviews and the age of the website. However, both these elements can be bought to make the fraudulent site more credible.

Around 26 million people fall victim to online scams every year in France. The Global Security Mag refers to The October podium (top 3 online scams currently in operation) and places the false shop websites in first position.

In second position are cybercriminal sites that present themselves as resellers of Amazon.co.uk unsold goods.

The general idea of this scam is to take advantage of the fact that, rather than destroying its unsold goods, Amazon had to find an alternative solution.

These pirate sites therefore present themselves as mandated by the e-commerce giant to sell these unsold goods, at knock-down prices of course.

Of course, the internet user orders products but either never receives them or has his or her bank card hacked.

The third place scam relates to electric bikes which are currently often hard to buy due to popularity. The sites offer bikes at prices that are sufficiently attractive to arouse interest (generally between 10 and 20% lower than the usual prices).

To maximise the confidence of the internet user, these swindlers sponsor articles in the press and affix them to their pages with the mention "Seen on XX Magazine" by inserting the advertorial that they have bought.

At best the discount shown is not the one actually applied, and at worst the consumer never receives the bike they ordered and paid for.

Some sites send a bike that does not conform at all to the characteristics presented, even to the point of serious defects that make it dangerous.