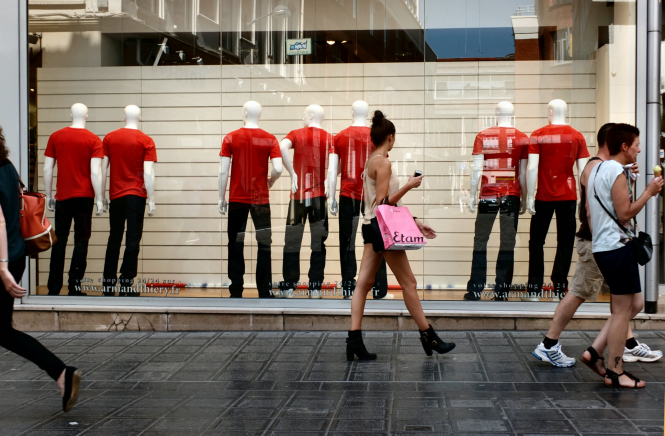 Shop owners are worried that introducing price cuts too early after reopening will affect their margins Pic: Gerard Stolk / Flickr

Independent shop owners in France are calling on the government to push back the start of summer sales so that they start in mid-July rather than on June 23.

In a letter to the ministry for the economy, independent shops unions la Confédération des Indépendants and la Fédération Nationale de l'habillement asked for the sales period to be pushed back by one month, to help their businesses recover from the impact of shop closures due to the health crisis.

Shops selling non-essential items and shopping centres have been closed since April 3 in France. They are due to reopen on Wednesday, May 19, with health protocols in place to limit customer numbers.

Read more: France deconfinement: What is opening from May 19 this week?

But owners of small, independent shops say holding sales as early as June will not give them enough time to recuperate their margins.

As well as customer limits which will be imposed this week, many shops will no longer be eligible for existing financial aid from the government once they reopen.

Major sales dates in France are regulated so that all shops – large and small - reduce their prices at the same time. There are normally two four-week sales periods, one in January and a second in June.

Alternative sales, such as Black Friday, are also allowed, and these are expected to go ahead as normal. The ‘French Days’ promotion will run from May 27 – June 2 among participating online retailers.

Some larger chains are also finding their own way to encourage customers to return through promotions that are not traditional sales. Clothing retailer Pimkie will start selling second-hand clothes by the kilo when it reopens on Wednesday, May 19.

The store, which has been badly hit by the health crisis, will sell one kilo of second-hand clothes for €30 this summer and €20 in winter.

New government financial aid measures for shop owners are planned for June at the latest, but have not yet been finalised.

This includes €500million dedicated to refunding owners for rental charges and rent paid while shops were ordered to close.

Clothing, shoes and leather-goods stores with less than 50 employees will also be eligible for compensation for unsold stock from May 25, with stock levels being compared to those of the previous year for reference.

The amount of compensation will be calculated according to how much the business received in fonds de solidarité financial aid in November 2020. Up to 80% of this amount can be claimed with a maximum claim of €8,000.

State support will also be made available for larger stores with monthly turnover of over €1million. For these, compensation for unsold stock will be based on fixed operational costs since March 31, with more details to be made available in coming days.

Finally, the government is working with banks to provide support for shops that cannot afford to restock with new items for summer. Shop owners have asked for an extension, which would give them 120 days instead of 60, to pay suppliers.

Covid France: How restaurants, shops, museums will reopen from May 19