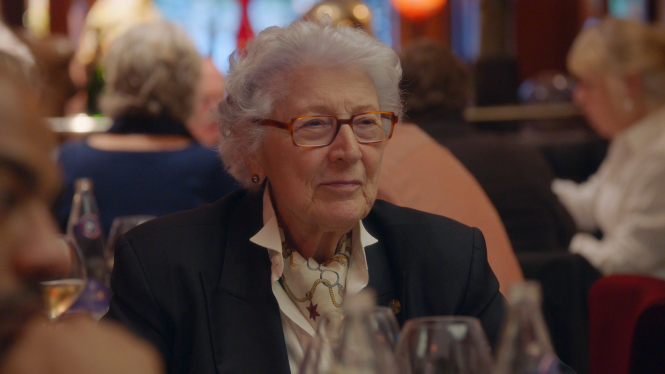 Colette Marin-Catherine said the Oscar for the documentary that protrays her visit to a concentration camp in Germany is for her brother, who died there during World War Two at the age of 19 Pic:

The subject of the Oscar-award winning French resistance documentary Colette has said that younger generations should learn from the horrors of World War Two so that they are never repeated.

Colette is a powerful 25-minute documentary following one of the last surviving French Resistance fighters, Colette Marin-Catherine, then 90 years old, as she visits the concentration camp where her brother died at the end of the war.

It shows how she was persuaded to go after meeting a young student, Lucie Fouble, who was doing research into the Mittelbau-Dora camp, near Nordhausen, eastern Germany, where Mrs Marin-Catherine’s brother, Jean-Pierre Catherine died, aged 19.

Mrs Marin-Catherine, now 93, said she had never before wanted to go and take part in “morbid tourism” but she decided in the end to make the trip to pass on the message of the horrors of the camps to future generations.

“For Lucie, it meant discovering hell, but her presence there gives a warning to her generation: keep an open spirit and remain vigilant so this monstrosity will never live to see another day,” she told The Connexion.

The documentary portrays a moment at the camp when Mrs Marin-Catherine gives Lucie the last remaining possession she owns from her brother: a ring he made for his mother, but never had the time to finish engraving her name on it.

She tells Lucie, when she is 100 she should think back to the time she visited the camp and remember.

The film was written and directed by American Anthony Giacchino, produced by French producer Alice Doyard and released by British newspaper The Guardian.

Producer Ms Doyard said on receiving the Oscar: “This reward and this film are homage to women of all ages, throughout the world who have joined in the fight for justice. Vive Colette and vive la France!”

Mrs Marin-Catherine told radio network RMC how thrilled she was by the news of the award, which she received the day after her 93rd birthday.

“It is a wonderful gift! It is the present I wanted! I want to share it with the whole team. During filming, and especially in the camp, they were discreet and respectful, they were perfect.

“This film has brought my brother out of the dark and the mists of time. He was a magnificent 17-year-old boy, intelligent, brilliant, sporty.

Camp Dora was created in 1943 to make the V2 missiles to attack Allied cities. The prisoners were forced to work 12-hour shifts in tunnels, handling dangerous substances in appalling conditions. It is thought that out of 60,000 internees 20,000 survived. Its story is relatively unknown because of its links to V2 rocket technology, later used to launch the American space programme.

You can read the story of Colette Marin-Catherine and the making of the documentary with interviews in the May edition of The Connexion.

You can watch the film in French, with English subtitles here.

It was a successful night at the Oscars for France, with director Florian Zeller winning best adapted screenplay for the film The Father, which is about an elderly man falling into dementia.

Mr Zeller said he wrote it for Anthony Hopkins, the greatest living actor. He said it was a dream to work with him, and that it was not an easy dream, because he is French.

Anthony Hopkins won the Oscar for best actor for his part in the film making him the oldest ever to have won the award at the age of 83.

French technician Nicolas Becker also won the award for Best Sound for his role in the film Sound of Metal, which tells the story of a heavy metal drummer losing his hearing.

Not an average day in the office for French movie stuntman