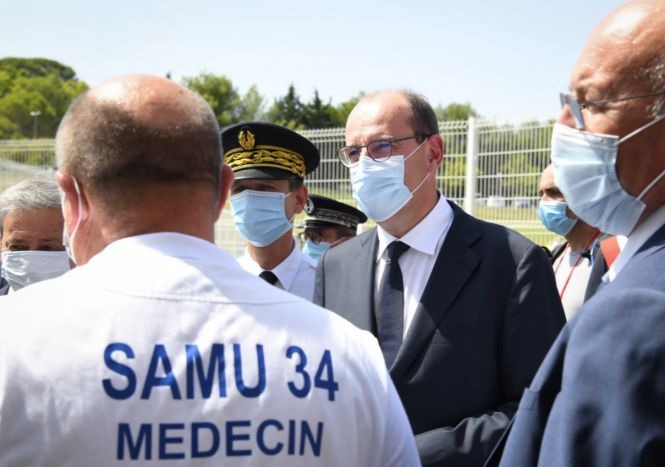 He made the announcement in response to the worsening Covid-19 situation in the country, as more cases are confirmed and experts reiterate warnings about a possible “second wave” of the epidemic.

The number of people diagnosed rose by 785 in the past 24 hours. Overall, there were 10,800 new cases reported in the past week.

The Prime Minister’s main points were:

The epidemic is ‘developing in the wrong direction’

He said: “The situation has worsened over the past few days. For around two weeks, the epidemiological situation - which we are following very closely - has been developing in the wrong direction. [There have been] 2,000 new cases per day, compared to around 1,000 three weeks ago.”

He warned that the alert threshold - the “seuil de vigilance” - would be reached this week. This number is reached when there are more than 20 new cases recorded per 100,000 inhabitants.

Some departments have already reached the higher number of 50.

He added: “The number of hospitalisations (800 per week) and the number of intensive care admissions (100 per week) are rising at a national level. Up to 25 new clusters are identified each day, compared to around five per day three weeks ago. All of this is worrying.”

The public is being ‘less disciplined’

Mr Castex partly blamed the rising numbers on public behaviour, and said that there had been a “bare minimum” of “vigilance, discipline and solidarity” among “some of us”. He admitted that this was “a minority, but still too many”.

He said: “Because of the summer and holidays, we are seeing too many family gatherings, with friends, or festivals, which are places where the virus can spread. Contamination levels are developing today among young people.”

The Prime Minister pledged that there would be more “communication and education” for young people, “who can wrongly feel less vulnerable” to the virus.

He warned: “I am saying this today with seriousness: If we do not react as a group, we are exposing ourselves to a high risk of the epidemic starting up again, which will be difficult to control. It will put tension on our health system...our economy, our education system, our collective and cultural life.”

Masks to be worn outside everywhere

Mr Castex called on the public to normalise the wearing of masks everywhere, even outdoors.

He said: “I will ask [local] prefects to spread mandatory mask-wearing in exterior public spaces as much as possible. In 330 communes, wearing a mask is required in the busiest public areas. [But] we must go further.”

He added that people should continue to practice physical and social distancing, especially in places where there are more than 10 people.

He said: “We must avoid taking a step back towards a significant reconfinement.”

Read more: 1,400 French communes require masks to be worn in the street

Large gatherings to be postponed

Large gatherings of more than 5,000 people had been scheduled to be allowed from September 1 - and even from August 15 in the case of some cultural events. But now, this has been pushed back to October 30.

But Mr Castex said that some events may still go ahead, with the “possibility for prefects to obtain waivers, as long as strict health protocol is followed”.

More checks and fines for non-compliance

Local authorities are to be given more power to fine and punish people who do not follow the rules, and may even be allowed to close certain public spaces temporarily if needed.

Mr Castex said: “We will intensify checks to ensure the effectiveness of our rules. This will be a targeted effort [by local prefects] who will be allowed to fine people when breaches are noticed.”

The Prime Minister also said that the country would aim to improve access to testing, especially for people who are showing symptoms.

He said: “We will improve our capacity for testing in all at-risk areas and populations, beyond clusters alone. [We will create] dedicated centres for fast results, wherever necessary.”

After Mr Castex’s speech, Professor Philippe Juvin, head of emergencies at the Georges-Pompidou hospital in Paris, criticised the Prime Minister for not being more firm.

He told news service FranceInfo: “The absence of clarity is becoming a public health problem.

“I wonder if the minister is a little nervous about showing some authority...the role of the Prime Minister is not to warn. It is not to plead for more masks. It is to make a decision.

“It seems like we are reliving the political plan I have seen as a citizen and as a healthcare worker in recent weeks and months: with orders, conflicting orders and half-orders. It’s not clear. But when we want to fight against an epidemic, we need to be firm.

“No-one can make sense of where in Paris masks are mandatory, because the Champs-Élysées do not require it. And when they tell us that events are limited to 5,000 people, it doesn’t mean anything.