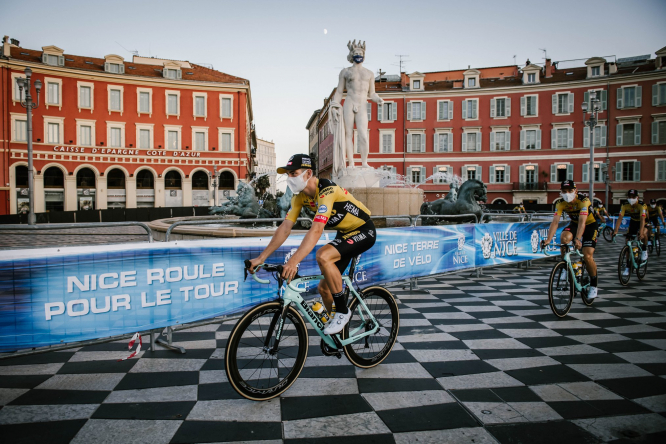 The 107th edition of the Tour de France got underway today (August 29) in Nice, but it was far from business as usual.

The world’s biggest cycling race was due to run from June 27 to July 19 but was delayed by two months due to the global pandemic caused by coronavirus. This year’s event will also involve new safety measures which include limited crowds, mandatory masks and restrictions on contact with the riders.

Nice was recently placed in the ‘red zone’ by Prime Minister Jean Castex, which means that the virus is actively circulating in the area. This has led to concerns, reported by national and international media, that the tour may not make it to Paris this year, where it is supposed to conclude.

Mr Castex downplayed these concerns, telling journalists on Thursday that: “we have taken numerous precautions and health protocols and I would remind you that this is an open-air event.

“The places where the virus spreads and there is transmission have no organisation. The tour has an organiser,” he said.

This year’s race will see a total of 176 riders - riding for 22 different teams - compete for the coveted yellow jersey.

The yellow jersey (maillot jaune), is worn by the rider who sits at the top of the general classification. This means that they have the best time over all the stages. So, in theory, a rider does not need to win any stage of the tour to be crowned overall champion, they just need to have the lowest time over all stages.

The riders will navigate through six regions and 32 departments in France as they wind their way from the south coast up to Paris. They will also stop in 12 new cities.

They will cycle the five major mountain ranges of mainland France: the Alps, the Massif Central, the Pyrenees, the Jura and the Vosges.

Earlier this week weather forecasters were predicting the possibility of thunderstorms at the weekend, which could put a damper on the race’s opening days.

The first stage is a 156km route around the hills of Nice, starting and ending in the heart of the city. Two more stages will take place around Nice on Sunday and Monday before the tour moves on to Sisteron.

It is due to end on the Champs Élysées in Paris on September 20.

Tour de truth: bicycles with pedals were invented in France