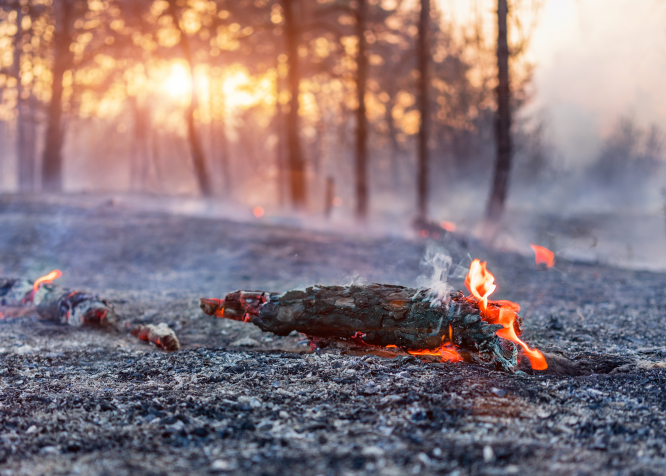 The 56-year-old man tried to start a fire alongside a Var road using a burning log, but was quickly stopped by passing drivers. Pic: yelantsevv / Shutterstock

A 56-year-old man has been arrested after trying to start a fire in a Var forest, five days after firefighters began battling a nearby wildfire which claimed two lives.

The man reportedly used a burning log to begin a fire in a wood alongside the 559 departmental road between Rayol and Cavalaire on the coast south-west of Saint-Tropez on Saturday (August 21).

Five passing drivers who spotted what he was doing pulled up and managed to stop him, remove the burning log and contain the blaze with bottles of water and floor mats. Their efforts meant only seven square metres of woodland were burnt. One French media report has also referred to the man being seen using a lighter and paper.

The drivers made a citizens' arrest, stopping the main from leaving and calling the police – which is legal in France if you catch someone red-handed carrying out a serious crime.

The man was taken into custody by the gendarmerie de La Croix-Valmer, and was initially set to be judged before Draguignan court today (August 23).

However the main hearing is now expected to be put off pending a judicial enquiry, in view of the "complexity" of the case.

Draguignan’s public prosecutor has said that the man has “diminished mental capacity but is still capable of appearing in court.”

Police stated that this act was not linked to the forest fire which has burnt more than 8,100 hectares of land across the nearby Massif des Maures.

This blaze, which began in the evening of Monday, August 16, caused 7,500 people to be evacuated from their homes and campsites and two people died.

It is thought to have been of human origin, perhaps caused by a discarded cigarette butt.

Although the spread of the blaze was contained by Friday night, it was still not fully under control last night and the flames at the fire’s strongest point were still well alight.

All of the forests in Var and Bouches-du-Rhône are still off-limits to visitors today, and the coastal area of Côte Bleue and the Massif des Calanques have been classed as at “extreme” risk of wildfires.

Weather conditions for fighting the fire are “very unfavourable” today, as temperatures are expected to climb to 31°C, with wind gusts reaching 70 km/h at midday.

This dry, windy weather is expected to last into the night, creating a real risk of resurgences.

A community rallying round

Since it began, the Var forest fire has raged over plains and woodland, holiday campsites and villages, leaving a trail of destruction in its wake.

France 3 has reported on the story of Jenny Garnita, who has lost everything in the blaze, but who has been moved by the kindness shown to her by strangers.

She was forced to leave her home on Tuesday, August 17, as the flames began to encircle the area of Grimaud where she lived. She had initially feared for her life. "All I could think of was phoning my mother to tell her 'I love you but I'm going to die'," she said.

Her house reduced to ashes, she is now staying in temporary accommodation in Draguignan, with only a few personal belongings.

Having seen her interviewed on television, a local resident, 'Isabelle', recognised her in a bakery the day after her evacuation from Grimaud, and began chatting with her.

Isabelle’s kindness has now been echoed by a local property owner, who is inviting Ms Garnita to stay free of charge in his studio flat this week.

Cigarette butt likely cause of fatal south of France wildfire