What will France's July 14 celebrations look like this year? 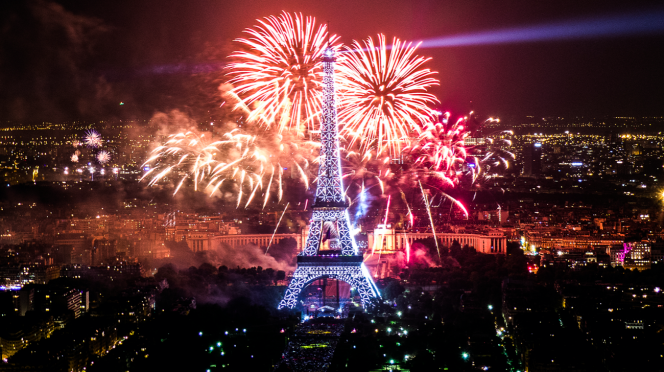 The traditional fireworks display at the Eiffel Tower will go ahead, but crowds are not permitted to gather underneath.
By Joanna York

La Fête Nationale, also called le 14 juillet in French or “Bastille Day” in English, is traditionally celebrated with a military parade along the Champs-Elysées in Paris (Ile-de-France), firework displays and dances in cities around France the evening.

However this year some changes have been put in place.

While a ceremony in Paris will pay homage to those who have fought the virus on the front line, celebrations elsewhere will not go ahead as usual.

Although France is no longer in a state of health emergency as a result of the virus, gatherings of more than 5,000 people are still not allowed, and nightclubs are closed.

This means many events that would usually draw crowds, such as fireworks displays and dances, have been cancelled or adapted this year.

Military ‘ceremony’ rather than traditional parade

Firstly, for 2020, the traditional military parade has been reduced and renamed as a “ceremony”.

While there will be 72 aircraft and 2,000 members of the military marching (around 2,000 less than last year) in the Place de la Concorde in Paris, there will be no automobiles included in the ceremony.

Due to social distancing measures, members of the general public will not be able to attend in person to watch the ceremony as usual, although 2,500 special guests have been invited.

The event will be televised throughout the morning on channel TF1, with the President scheduled to arrive for the ceremony at 10h45.

Covid-19 workers and de Gaulle to be honoured

This year the military ceremony will honour the French armed force’s fight against Covid-19. Medical professionals and other key workers will also be recognised.

Former government spokesperson Sibeth Ndiaye previously said that the President wanted to make a gesture of gratitude on behalf of the nation, to honour the exemplary behaviour of “supermarket workers, rubbish collectors and all professions that allowed France to hold on” during the pandemic.

Music will be provided by the légion étrangère (the French Foreign Legion) during the ceremony and President Emmanuel Macron will also give a televised interview.

The tradition of a televised presidential interview on 14 July started in 1978, but this will be the first Macron has done during his presidency.

No crowds for Paris firework display

The biggest national firework display - which traditionally takes place at the Eiffel Tower in Paris - will go ahead, as will the Concert de Paris orchestral performance given underneath the tower, before the fireworks.

However, the crowds that usually fill the Champ de Mars park in front of the tower will not be present. The park and surrounding area will be closed to the public in order to maintain social distancing measures by preventing crowds forming to watch the spectacle.

Local authorities in Paris have called on inhabitants to watch the fireworks from a balcony, a window, on television or online, instead of attending in person.

The fireworks will be broadcast from 23h on television channel France 2 and online at www.paris.fr

The Concert de Paris will be broadcast from 21h10 on Radio France and France Télévisions.

'Bals' and dances cancelled too

As the July 14 is a national holiday (jour férié) in France, many parties are often held the night before. Traditionally these include the bal de pompiers, or firemen’s ball, in Paris, held to raise money for local fire departments together with other "bals" held in public areas.

This year these have been cancelled in Paris, Lyon, Rennes, Strasbourg and Bordeaux.

Some shops to remain open

Although July 14 is a national holiday in France, some significant shopping areas will remain open. In Paris, Galleries Lafayette and BHV will be open, as well as many major shopping malls in the city centre and surrounding suburbs.