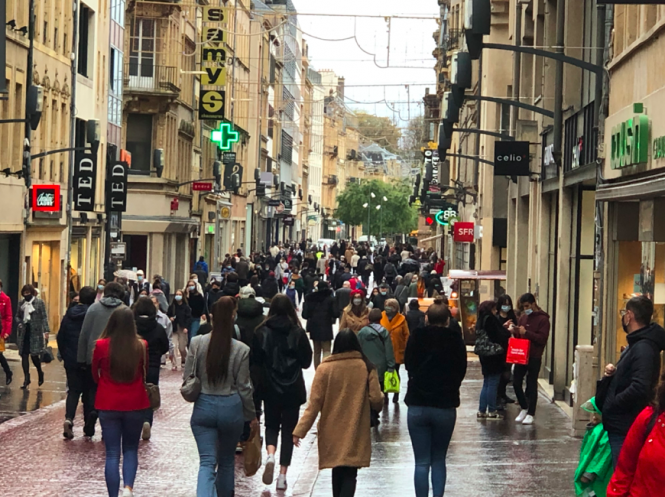 People shopping in Metz, Moselle. The department has significantly higher instances of the South African and Brazilian variants than other places in France
By Joanna York

Covid variants are spreading in France, with the UK variant currently accounting for 36% of positive cases and the South African and Brazilian variants accounting for 5%, Health Minister Olivier Véran said in a press conference on February 18.

Health body Santé publique France (SPF) has said that these percentages do not mean that 41% of all Covid cases in France are now variants.

Rather, it indicates the amount of positive tests taken within a fixed period, which have then been checked and are suspected to have the variants.

We look at where the variants are spreading in France.

Data released by SPF from February 17 showed that the UK variant accounted for 30% of positive cases in 40 departments (out of 94 which provided data).

The data shows that the variant has spread throughout all regions of France, with incidences over 50% in 12 departments.

In some areas the rate has climbed even higher – and up to 70% in Dunkirk.

The UK variant, also called the B117 variant, is known to be highly transmissible, potentially because the virus produces more infectious particles - expelled when people cough, for example - than previous variants.

The B117 strain also replicates twice as fast as the original strain that emerged in Wuhan, making it 40-60% more contagious.

Data – which has not yet been peer reviewed – suggests that the UK variant could be 30% more deadly than previous strains of the virus.

But trials run by major vaccine providers show that the AstraZeneca, Pfizer/BioNTech, and Moderna vaccines all offer high levels of protection against the variant.

SPF found that eight departments had a proportion of over 10% of the South African and Brazilian variants.

But one department had notably higher rates – in Moselle the proportion of the variants was at 40%, according to data from February 17.

There is no indication that this variant causes more serious illnesses than previous strains, but it does spread rapidly, and studies have suggested that the variant may be able to escape Covid antibodies, making it more resistant to some vaccines.

South Africa has suspended use of the Oxford/Aztra-Zeneca vaccine after a study found it offered “limited” protection of only 22% against local variants of the virus.

But Pfizer and Moderna trials showed that the two vaccines offered immunity at a level considered to be protective against the variant.

A statement from the US Centre for Disease Control and Prevention has suggested that the Brazilian variant may have increased capacity to reinfect individuals who have already had the Covid virus, and that it may be able to evade parts of the immune system.

But there is, so far, no evidence to suggest that vaccines will not be effective against this variant.