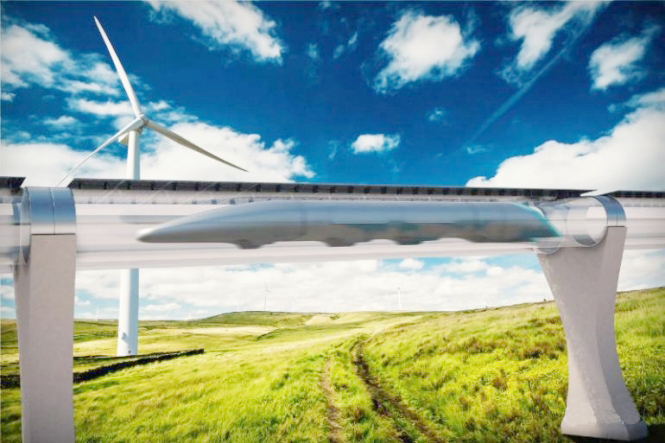 US firm Hyperloop Trans­portation Technolo­gies is building the track at an old military airbase near Toulouse.

Its system will see electric-powered passenger pods levitated by electromagnets and gliding at high speeds through low-pressure tubes (where much of the air has been sucked out).

Mr Musk floated the idea of pods shooting through depressurised tubes in 2012 and named them hyperloops.

However, he decided to leave the idea for other firms to develop (although he recently started the amusingly-named Boring Company which aims to construct underground versions).

HyperloopTT says it was the first to develop the idea and quotes speeds of 1,000kph, with times of 30 minutes on a possible future 381-mile journey from Los Angeles to San Francisco.

However, CEO Dirk Ahlborn recently told La Tribune French newspaper that he now expects operational speeds to be around 400-500kph.

Mr Ahlborn said the price of installing a line is expected to be around the same as for a TGV line but operating costs will be much lower, partly due to the tube having solar panels on the top to produce electricity.

Its site at Francazal airfield on the outskirts of Toulouse will see a 300m test track built on the ground by autumn to be used for air-lock tests.

A year later, a 900m track on 6m concrete pylons should be ready for full-scale tests using passenger cabins being built by Spanish firm Carbures.

Individual 20m long steel tubes, with a 4m diameter and weighing 65 tonnes, will be transported by road from Spain to the site.

Toulouse metropolitan authority has made the site available for the ‘bargain price’ of €600,000 on condition that a research and development centre is also built. It is arranging removal of pollutants and paying for part of it.

As an aeronautics hub, Toulouse sees the technology as similar and capable of attracting jobs and researchers.

Meanwhile, the Canadian firm TransPod is also set to build a half-scale test track for a similar system in Haute-Vienne, starting in autumn. It also uses pods shooting through depressurised tubes and describes its system as being driven by linear induction motors and air compressors.

Thierry Boitier of TransPod spoke to Connexion and said: “We aim to be running tests in Haute-Vienne by next year on a 1km section, which will be extended to 3km, soon after.

“Limoges famously does not have a TGV link with Paris or with Toulouse, which is why local authorities are so interested in alternatives.”

The half-scale system will be made of  2m steel tubes and will not be used by passengers. Its purpose will be to perfect the motorisation and to check acceleration and speed.

Studies show the TransPod system should also cost the same or slightly less than TGV lines to build.

The company said it hopes future commercial services of its system will be able to transport passengers at speeds of up to 1,200kph, just below the speed of sound.

“Every test we have done so far shows that it is practicable and it will open up new transport opportunities which do not at present exist,” Mr Boitier said.

However, hyperloop is not the first time France has been at the centre of levitation technology research.

In the early 1970s an air-cushion hovertrain called Aérotrain was developed in France using jet engine propulsion. Sections of a test track viaduct can still be seen north of Orléans.

Work was abandoned on the idea after the SNCF developed plans for  the rival TGV instead.

If HyperloopTT’s French tests go well, it could be on track to build the first commercial hyperloop track to open in 2020 in the United Arab Emirates between Abu Dhabi and Dubai.