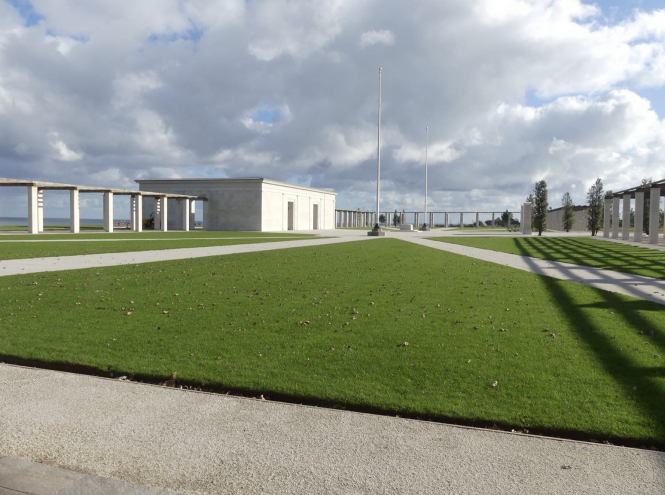 'Normandy was one of the most intensive campaigns ever fought by the British Army. On D-Day, the Allies landed over 150,000 troops on Normandy' Pic: Normandy Memorial Trust

Britain was the only Allied country involved in the Normandy Campaign in 1944 not to have its own memorial in the country.

The new British Normandy Memorial is outside Ver-sur-Mer, overlooking Gold Beach, one of the beaches where British soldiers landed on June 6 that year.

The names of more than 22,000 men and women who died in the fight to liberate France from Nazi occupation are carved onto the columns of the memorial. Most of the casualties were British soldiers, sailors, marines and airmen who lost their lives in the D-Day Landings.

The memorial project was driven by a group of World War Two veterans, who established a trust in 2016 to raise funds for its construction.

George Batts, a D-Day veteran and the patron of the Normandy Memorial Trust, said in 2019 that he hopes the memorial “ensures there is never another world war” as well “honouring our comrades that we have left behind”.

Normandy was one of the most intensive campaigns ever fought by the British Army. On D-Day, the Allies landed over 150,000 troops on Normandy.

More than 80,000 were British and Commonwealth troops and around 73,000 were American.

Around 4,400 Allied soldiers are thought to have died on D-Day itself, along with thousands of French civilians.

It is not known exactly how many were British but the number is estimated to be over 1,000.

Paul Reed, a leading military historian specialising in the two world wars, told The Connexion that he hopes the memorial will show how great the British and Commonwealth contribution to the Battle of Normandy was.

“The British role and the Canadian role was vitally important and I hope this memorial helps to assert this.”

Due to Covid-19 restrictions making travel to Normandy difficult for veterans in the UK, a live broadcast of the official opening of the memorial will be shown on the British Normandy Memorial website. It will be open for anyone to watch.

Mr Reed said that the veterans he has spoken to have told him they are very keen to visit the memorial.

“Although they have been to see the graves of their friends in the war cemeteries, for them it will be meaningful to go and see the names of their mates, the guys who died alongside them, on a memorial like this.

“When they go to memorial sites they see a glimmer of their youth and the experience they had there in 1944.

“Many of them have kept the stories of what happened there a secret, but being there in Normandy, suddenly they want to tell those stories again and you really hear incredible things.

“I think for all of them it is hard in some ways, but they often say it is about laying ghosts to rest. Particularly visiting the graves of men who died alongside them. It is important for them.”

He said the memorial will also be essential in helping to educate future generations about what happened during the war. “There will be a new generation who visit Normandy who will have never met a veteran. It will seem as distant to them as Waterloo or the Romans.

“Places like this help to ensure that future generations can understand what happened there and it is not forgotten.”

Ian Reed, director of the Allied Forces Heritage Group, said the memorial was a way of recording the facts of the Normandy campaign, outside of the Hollywood narratives.

“It has never really been in the British nature to erect huge monuments to military events in other countries. Where other nations have large monuments across France, Britain’s role has sadly been recorded only by huge cemeteries.

“The Memorial at Ver-sur-Mer has been a long time coming, and it will ensure a balancing of the events of June 6 for future generations, and commemorate all those who gave everything for the liberation of Europe and the overthrowing of tyranny.”

The Connexion is hiring an experienced journalist
20 September 2021
More from Culture
More from Connexion
Get news, views and information from France
Join the newsletter
Subscribe to The Connexion