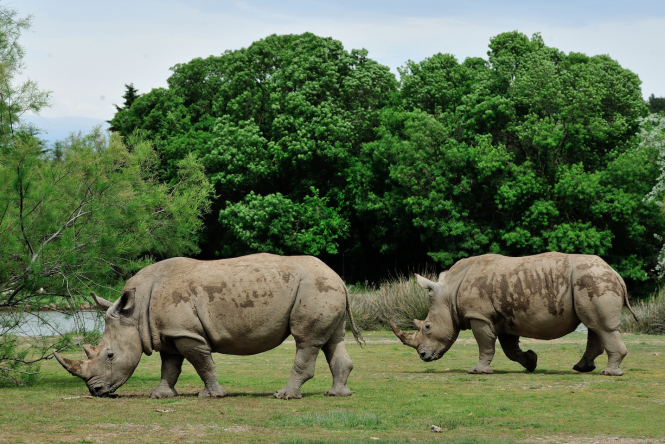 No humans on show, but park life carried on as normal in lockdown at France's Sigean Safari Park. Photo (c) courtesy of Sigean.
By Samantha David

There were no humans watching the baby animals at Sigean Safari Park this spring, but the animals didn’t notice anything different from normal. Their lives continued as serenely as ever, the lack of visitors notwithstanding. Only the birds behaved differently, said Marianne de Jesús, the General Curator Assistant. “We noticed that they occupied their space more fully, instead of staying away from the viewing area. The behaviour of the other animals didn’t change at all.”

This is evidence of a successful strategy of hiding visitors from the animals so they remain unstressed and behave as naturally as possible. It also contrasts to the behaviour of pandas in Hong Kong – who took advantage of lockdown privacy to mate spontaneously for the first time in a decade. “The size of enclosures affects the animals’ behaviour. Our enclosures are very big so animals can hide if they want, and visitors are well disguised from the animals, so they are less disturbed by them. So for many of our animals, the ‘confinement’ didn’t change anything much.”

The Réserve Africaine de Sigean, between Narbonne and Perpignan, opened in 1974. It now covers around 750 acres, the spacious enclosures housing 160 different species of birds, mammals and reptiles, most of them from Africa. It undertakes scientific research, teaching and conservation as well as controlled breeding programmes. Since opening, there have been more than 10,000 births at the park, including rare species of antelopes, gazelles, giraffes, wallabies and white rhinoceros.

The park is also home to bears, monkeys, chimpanzees, zebras, alligators, and big cats such as lions and leopards. It used to have a small herd of elephants, but no longer has them. “The last of our elephants were moved to Germany some years back, and although there is a plan to get elephants back to the park, it’s very long term,” said Marianne de Jesús. “In the past, elephants’ requirements weren’t as well understood as they are now, so we don’t currently feel we can offer them the best home. They require very specialised care.”

Elephants need to live in matriarchal groups; they need vast amounts of space, and can be seen as destructive, enjoying activities like uprooting trees and trampling ponds into mud. “The last elephant born here is now living in Germany, and as part of the European Breeding Programme she is now pregnant, which is great news. We like to keep up with news of animals who were born here.” Many larger animals live in safari-type enclosures, and can be seen by visitors driving through in cars or taking one of the park’s minibus tours around the enclosures. The route through the various spaces is 7.5kms long.

“The lions were fine during the lockdown: we continued driving through their enclosure – so that they remained used to seeing cars. We also let the giraffes out at their usual hours, and the rhinos, bears, and zebras are always outside so nothing changed for them.” Life at the park is as natural as it can be, but there are limits.

Carnivores and herbivores do not live in the same enclosures, meaning the carnivores do not hunt but are fed by the keepers, and the herbivores do not have to flee their predators. For birds such as flamingos, pelicans, and herons however, life is very natural. They live on open wetlands, and stay because they have no reason to leave.

As well as drive-through enclosures, there are vast areas of the park to explore on foot, so visitors to Sigean are advised to wear comfortable shoes and bring a shady hat. Binoculars are also useful for watching animals at a distance, which also adds to the romantic impression of really being on safari in Africa. The circuit can be accomplished in two hours 30 minutes, but only if you don’t dawdle on the way, which is after all the whole point of going on safari. Most families spend an entire day at the park.

Keepers enjoy sharing their knowledge with visitors. “We all really enjoy that side of our job, educating people about African animals. We feel we are ambassadors for the animals, and try to inform the public about wild animals, and about the importance of conserving nature.” Because they have some of Europe’s largest herds of wild animals, zoologists at Sigean are particularly strong on studying animal behaviour in the wild. Other subjects studied include dental problems in carnivores and contraception in chimpanzees.

The important of conservation

Conservation of rare and under-threat species is also important, not just so that zoos have animals but also so that animals bred in captivity can be reintroduced to the wild. This is not easy, however, especially in Africa where poaching is widespread, civil wars decimate the countryside, and millions of acres of savannah, wetland, and forests are being cleared for agriculture. It is all too probable that many species will disappear from the wild, and will in the future only exist in captivity.

Sumatran tigers, for example, are threatened because only 7% of their natural habitat remains, and only around 100 Sumatran tigers still live in the wild. They are threatened by habitat destruction and poaching, for trade of animal parts as traditional oriental medicine or trophies. In 2011, 2013 and 2015, as a result of the breeding programme, a Sumatran tiger called Kirana gave birth to three cubs at Chester Zoo in the UK.

Gorilla breeding has been managed by the programme since 1987, and almost all gorillas introduced into new groups produced offspring within two years, meaning that the Gorilla population is sustainable and genetically healthy. This is why zoos do not simply breed the animals they have but coordinate breeding programmes via the European Association of Zoos and Aquaria (EAZA), which organises animal exchanges and relocations, to ensure captive populations remain genetically healthy, and behaviourally wild.

The park at Sigean is taking part in 42 captive breeding programmes, and in 2019 it also donated €70,000 to animal conservation projects in Africa including J.A.C.K. which takes-in and cares for orphan chimps. Sigean, like all other establishments in the scheme, was forced to pause its participation in the European Breeding Programme during confinement. “It will be good to restart the programme. We have animals here waiting to be relocated, and are also waiting for animals to arrive, but this can only happen when it is safe for them and for their human keepers to travel.”

The park also runs educational schemes, supplying preparation materials to schools planning a visit to the park, for example, as well as guides who accompany educational groups throughout their visit to the park, helping people spot the animals, understand their behaviour and their interaction with their habitat. They also run teaching sessions for small groups of children on subjects including biological classification, reproduction, and feeding. The safari park is supported by an association called 'Les Amis de la Réserve Africaine de Sigean' which raises money, awareness, develops and contributes teaching materials, and also publishes newsletters, posters and books.

The park is open all year round, employing 82 people (plus an extra 55 seasonal workers in the summer) and distributing three tonnes of animal food a day – 198kg of fruit and vegetables, 134kg of dry bread, 75kg of meat, 101kg of fish, 511kg of grain and pellets, plus 1,518kg of forage. It has its own veterinary clinic and laboratory on site.

This year there have been baby antelopes, springboks, buffalos, leopards and painted dogs. “We’re also enjoying the antics of our three-year old chimp who is full of tricks.” The other great time to visit is in September, as the weather begins to cool. At the time of going to print, it wasn’t certain what hours the safari park would open in 2020 summer, nor were there details of hygiene precautions.

Keepers have been wearing masks when it has been impossible to practice social distancing (when treating animals in the infirmary for example), and the public may be required to wear them when visiting. It was also not known what catering arrangements will be in place. So check the website (reserveafricainesigean.fr) before planning a visit.