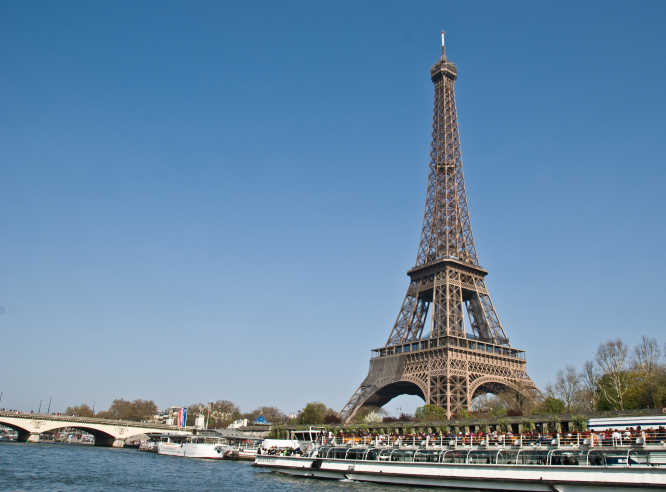 This year is the 130th anniversary of the Eiffel Tower, one of Paris’s most famous landmarks – yet it was originally planned to be dismantled after 20 years.

It was designer Gustave Eiffel’s crowning achievement, but he was responsible for many other iron structures which can still be seen around the world.
The Eiffel Tower was built for the Exposition Universelle of 1889 because organisers wanted to mark the 100th anniversary of the French Revolution.

They launched a competition to build an iron tower on the Champ de Mars with a square base, 125 metres across and 300 metres tall. There were 107 entries but Eiffel’s project - which he had created with engineers Maurice Koechlin and Emile Nouguier, and architect Stephen Sauvestre - was the winner.

The original plans included stonework pedestals, monumental arches to link the columns and large glass-walled halls, a bulb-shaped design for the top and many other ornamental features.

The plans were simplified but elements, such as the arches, were retained.

It took two years, two months and five days to build: five months for the foundations and 21 for the tower.

All the elements were made in Eiffel’s factory at Levallois-Perret, on the outskirts of the capital. Between 150 and 300 workers were employed at any one time, supervised by constructors who had worked on Eiffel’s other metal viaduct projects.

The tower - nicknamed the “Dame de fer”, Iron Lady in French – is made up of 18,000 pieces and each one was designed and calculated and then made to an
accuracy of a tenth of a millimetre.

The pieces of this extraordinary jigsaw were held together by 2.5million thermally assembled rivets, which contracted during cooling to ensure a tight fit.

Each rivet required a team of four men: one to heat it up, another to hold it in place, a third to shape the head and a fourth to beat it with a sledgehammer.

The foundations were made of concrete installed a few metres below ground level on top of a layer of compacted gravel.

The tower was assembled using wooden scaffolding and small steam cranes which moved up and down the tower itself.

Sand boxes and hydraulic jacks, which were later replaced by permanent wedges, were used to position the metal girders to an accuracy of one millimetre.
It was finished in what was regarded as record time on March 31, 1889, and Eiffel received his Legion of Honour on the narrow platform at the top.

Such a huge structure did not please all Parisians. A “Protest against the Tower of Monsieur Eiffel” was published in the newspaper Le Temps and signed by some of the big names in the world of literature and arts at the time, such as the writer Guy de Maupassant and composer Charles Gounod.

It attracted unflattering descriptions in the press such as “this truly tragic street lamp”, a “half-built factory pipe” and “this giant ungainly skeleton”.

Eiffel defended the attack in the newspaper, saying: “I believe that the tower will possess its own beauty. Are we to believe that because one is an engineer, one is not preoccupied by beauty in one’s constrtions, or that one does not seek to create elegance as well as solidity and durability?

“Is it not true that the very conditions which give strength also conform to the hidden rules of harmony?

“Now to what phenomenon did I have to give primary concern in designing the tower? It was wind resistance.

“Well then! I hold that the curvature of the monument’s four outer edges, which is as mathematical calculation dictated it should be, will give a great impression of strength and beauty, for it will reveal to the eyes of the observer the boldness of the design. Moreover, there is an attraction in the colossal, and a delight to which ordinary theories of art are scarcely applicable.

“For my part, I believe that the tower will possess its own beauty.”

The tower was an immediate popular success, visited by two million people during the Exposition Universelle of 1889. It now attracts more than seven million visitors a year.