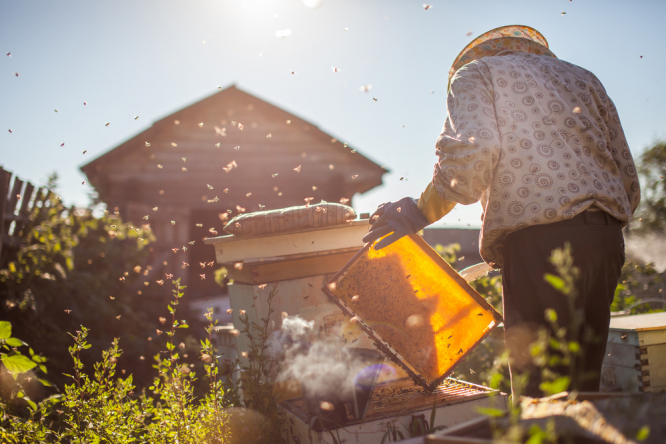 France’s beekeepers are experiencing mixed emotions as they celebrate a record-breaking 2020 honey harvest while preparing for what looks set to be a difficult 2021.

Apiarists in France had a record 2020, produced nearly 32,000 tonnes of honey last year, a 47% improvement on the 2019 harvest, setting a new record for year-on-year rise in production, according to figures from the Observatoire de la production de miel et gelée royale.

There was also a 14% increase in the number of beekeepers in France, notably among smaller farms with fewer than 50 hives. The Auvergne-Rhône-Alpes region boasts the most beekeepers, counting 22% of the total number in France, followed by the Grand Est region.

But there are already fears that 2021’s harvest will be noticeably lower. Frosts in April, when temperatures in the north of the country dipped below -10C for five days, damaged spring flowers.

As a result the bees began tapping into their honey supplies. Some honey producers in the north fear their harvest will fall by half next season, while a 40-year beekeeping veteran in the southwest told La Depeche du Midi that she had never experienced a spring like 2021 after cold weather, rain and high winds kept her bees from foraging.

WHO recommends lifting of international Covid travel bans
23 January 2022
More from Food and Drink
More from Connexion
Get news, views and information from France
Join the newsletter
Subscribe to The Connexion