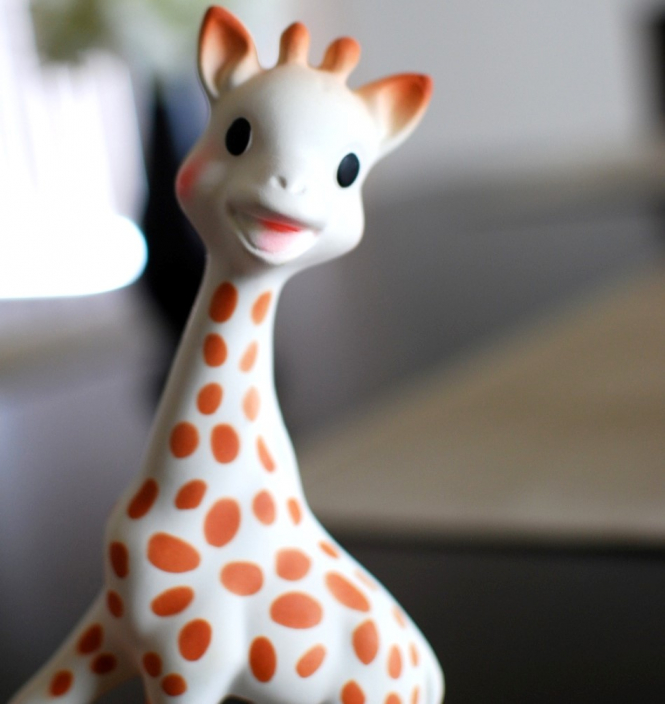 The firm claims all five senses are stimulated by the Sophie giraffe toys: touch, smell (it smells of natural rubber), taste (also of natural rubber) sight, and sound because of the squeaker Pic: Janine / Flickr

Nearly all babies in France have cut their teeth on a squeaky rubber giraffe called Sophie – and it celebrates its 60th anniversary this month.

The giraffe is made out of natural rubber, which arrives from Malaysia in liquid form.

It is then manufactured in the Haute-Savoie department, going through 14 different stages, including having its spots spray-painted by hand in edible paint.

Until 10 years ago, the market was exclusively French, but the company making the toy has started to export, with the US, Britain and Germany the main markets, followed by Australia and Japan.

Stéphanie Arnaud, deputy managing director of Vulli, the firm which now makes Sophie giraffes, said: “There wasn’t a design directive to make a rubber giraffe for babies in cradles, but one of the rubber specialists in the original company was experimenting with forms and came up with a giraffe, and it proved to be a hit. For babies of three months old, it is ideal – the long neck and legs means they can grab it easily, and the marks on the body means that they can see it easily at a time when little ones are still developing their sight.”

The firm claims all five senses are stimulated by the Sophie giraffe toys: touch, smell (it smells of natural rubber), taste (also of natural rubber) sight, and sound because of the squeaker. “I know I am an interested party, but it is true that Sophie giraffes become a favourite toy for little children very quickly,” said Ms Arnaud.

In spite of the toy’s popularity, there is no secondhand or vintage market for them, as with Barbie dolls which are aimed at older children.

“Sophies spend a lot of time being chewed by babies, so it is not something you can really sell on,” said Ms Arnaud.

“We do not really know what happens to most of our Sophies as children get older. They might end up in a treasure chest of baby memorabilia, like the first booties, or I am afraid they might end up being claimed by the family dog…”

In the manufacturing process, raw liquid rubber is heated and then poured into moulds made out of plaster, which is good for absorbing excess liquid.

The moulds are spun at high speed to form the shape of the toy, and then taken out, still very soft, and left to dry for three months.

Afterwards, the rough edges are sliced off, the toys are polished, and the squeaker inserted before they are finally spray-painted.

“We only have women doing the painting. They are more precise and suited to that job,” said Ms Arnaud.

“It takes about a week to learn how to do it. You have to have precise gestures with the spray, and then we rotate them – spending too long painting spots on toy giraffes can send people round the bend.

“It means, though, that every Sophie is different in some way from the others.”

The original has been used to brand other toys and baby equipment – there is even a Sophie pram – but the company is careful to ensure competitors do not copy the toy.

“It could be made much cheaper out of plastic in Asia somewhere, but it would soon lose the safety, quality and originality which makes our Sophie giraffes so special,” said Ms Arnaud.

Baby born after uterus transplant is a first for France

‘Village of cats’ in south of France inspired by an old legend
20 January 2022
More from French Life
More from Connexion
Get news, views and information from France
Join the newsletter
Subscribe to The Connexion