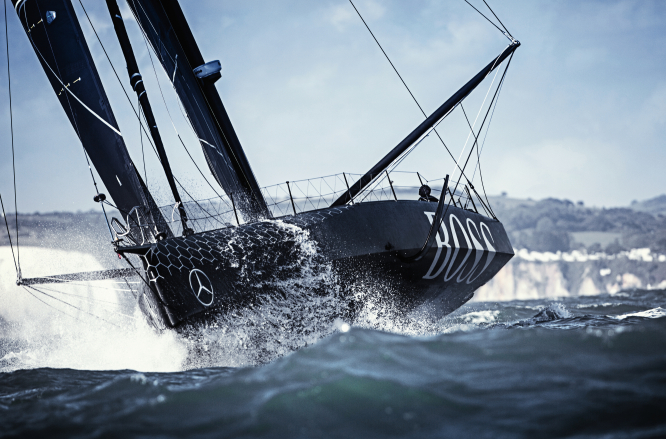 THE EPIC Vendée Globe round-the-world race captures the imagination, not just because it requires extreme skill, fitness and courage, but also because of the drama.

On November 6 this year, no fewer than 30 skippers are due to head off for three months alone in dangerous waters - facing storms, exhaustion and unknown hazards. More than half probably will not finish, and some might not even return: in 1996, Canadian Gerry Roufs was lost at sea, and there have been many other near-tragedies.

Who voluntarily takes on this epic challenge – and why?

It's known as the 'Everest of sailing' for good reason

“In my opinion the Vendée Globe is the toughest sporting challenge left on the planet. More than 4,000 people have climbed Everest; over 500 people have been into space. However, less than 100 people have raced solo, unassisted, around the world.

“I’m very competitive and focused on the challenge. This is what drives me to sail as fast as I can solo around the world.”

When he was younger, Alex Thomson wanted to be a helicopter pilot like his father, but he was told that his eyesight meant he 'couldn’t even get in the navy'. The only other thing he enjoyed was sailing, so he became a deckhand.

Alex rapidly racked up victories, and at 25 became the youngest winner of the Clipper Round The World Race (with a crew). Since then, he’s been forced to abandon two Vendée Globes (2004 and 2008) but in 2012-13 he grabbed third place despite a second-hand boat.

This year, he is on an impressive, custom-built £3.5million boat and continues to be sponsored by the headline-grabbing Hugo Boss. Is he aiming for that prized first place?

“My main aim is to finish! As Sir Robin Knox Johnson said, ‘To finish first, first you have to finish.’ There is a good reason this race is known as the Everest of Sailing, because currently only 50% of attempts to complete the race have been successful.”

The Vendée Globe has only ever been won by Frenchmen, but I hope to be the first British sailor to win it.”

We're keeping it in the family

Romain Attanasio says he has no illusions about winning. Well-known on the offshore sailing circuit, this Frenchman spent 10 years on solo Figaro races and won the Caribbean 600 last year.

His other half is professional sailor, Samantha Davies, who competed in the previous two Vendée Globes. They have a son, Ruben, and take it in turns to compete in epic races.

“When your partner competes in the same sport as you, it can be frustrating, but also if she or he succeeds, it’s a shared success,” Romain said. “The Vendée Globe is the top of all offshore races, so I always wanted to do it but it wasn’t possible before.”

It became possible thanks to this particular boat, which has already been in three previous Vendée Globes. Sam and Romain raised €450,000 through their own company, smaller sponsors and crowdfunding.

“It’s going to be strange for me to be at the line-up and not get on a boat,” said Sam, “especially as some of my previous competitors will be there! Who knows, maybe I’ll be back out there in 2020. It’s risky but you shouldn’t be afraid of being afraid. The best advice I ever had was don’t listen to other people’s opinion, just your own conscience.”

It will be the first time a both halves of a couple have competed in the Vendée Globe, and their unique situation means they’re both aware of the highs, lows and dangers. Back in the Mini Transat in 1999, a dreadful storm hit the Bay of Biscay and Romain’s boat turned upside down.

“I was rescued by a cargo vessel then airlifted to Spain and when I got back to France, I had no papers, just a borrowed sweatsuit and my belongings in a bin bag. Of course it can be dangerous, but it’s better to go to work doing what you love than dragging yourself to a job you don’t enjoy.”

Romain’s charm and enthusiasm are infectious. Combined with his experience and support, you can’t help feeling he might surprise himself with his result.

Born in New Zealand and raised in America, Conrad excelled in cycling and running before moving to Lorient in 2009 to pursue sailing. He has notched up a number of victories, winning the 2012 Global Ocean Race and hopes the Vendée Globe will be the catalyst to a successful sailing career.

“The greatest challenge so far has been to make it to the start,” he comments, having encountered difficulties securing sponsorship. “I’ve been thinking about the Vendée Globe for 10 years. I’m registered, qualified, the boat is ready and I am, too.

“I want to finish, and I want to share the story of this race and this type of sailing with a bigger audience. It’s poorly appreciated outside France but it’s the most extreme solo adventure that exists.”

Conrad is this year’s only sailor with dual nationality and - if he can secure the final sponsorship - he will become one of just four Americans to attempt the Vendée Globe.

Also among the fresh faces this year is French skipper Thomas Ruyant, who has already won the Mini Transat, Route du Rhum and Normandy Channel Race, so he faces high expectations.

“I can’t say I’m aiming for the podium,” he said. “The standard is very high but that doesn’t put me off, I’m very competitive!

“I’ve always sailed, as my father and grandfather love boats and the sea, but I’ve never spent more than 20 days alone at sea, and I’ll also be on oceans that are new to me. Technical problems are the greatest risk, and they’re not easy to manage alone.”

There will certainly be enough to challenge him in the Vendée Globe, and he’ll also be the only competitor ever to be sponsored by a non-profit organisation: Le Souffle du Nord pour le Projet Imagine. Theirs is a positive message, which Thomas communicates using the story of the hummingbird which tries to put out a forest fire using the few drops he can carry.

“It’s all about doing your bit. That’s the message I’m hoping to get across, the idea of solidarity. Our team is for everyone, so follow us and share the adventure!”

It is a physical, mental, and emotional challenge

Another competitor with a broad, educational message is Rich Wilson, graduate of Harvard and MIT and former teacher who founded the non-profit ‘sitesALIVE’ that shares online resources with schools.

“I knew that the real world provided better problem sets than textbooks, so if we could combine the drama of a real world voyage, with science, geography and maths lessons, that might be very effective for teachers.

“At sea, I spend about two hours every day working on the school programme, time taken away from sleeping, sailing, repairing, eating. But it inspires and motivates me, too, so I have absolutely no complaints about that!”

He says that with a 10-year-old boat and the oldest skipper, the podium is not in view, but he loves sharing the adventure.

“The Vendée Globe is the greatest sailing race in the world. It is a physical, mental, and emotional challenge. You don't stop if it gets too windy. You don't come in for lunch. You don't have a repair team every night. It’s 28,000 miles, alone, no stops, no assistance, in a big boat, racing. Nothing can compare to the challenge. And within that challenge, the camaraderie of the skippers and their teams, the humility of the skippers, the warmth and welcome of the French public, is without equal, certainly in sailing, and perhaps also compared to any other sport.”