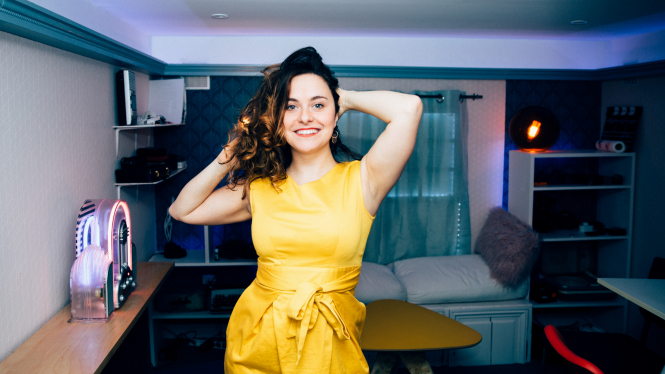 Tough times lie ahead for the live entertainment industry, including Paris’s burgeoning stand-up comedy scene. Before Covid-19, stand-up had become increasingly inclusive in the capital. Even Anglophone comedians had found enthusiastic audiences.

American stand-up Sarah Donnelly says there has long been a demand for English-speaking comedians. “Often during the act we ask where audiences are from,” she said. “It’s generally a mixed crowd, around 50% French and 25% other non-Anglophone nationalities, plus Anglophones, and maybe one or two Americans. Younger audiences in their 20s are often students, into US/UK culture, they’re studying English, or have done an internship in the UK, and like watching Netflix in English." “Then there are the 30-somethings who speak English at work, or have English-speaking partners, have worked abroad, lived in an Anglophone country, studied abroad. We also get Asians and other non-French speakers coming along.”

She has lived in Paris for eight years, doing stand-up. “It was a side-hustle in the US, but I fell in love with a Frenchman and moved to France. In 2012, when I started out here, there was only one other English stand-up show in Paris, but it has really expanded. So, two kids later, I’m still here and still loving it.”

The death of a cultural polymath, virtual viewings in the millions and confinement creativity; hear the arts and culture news being talked about in France this month.

Comedy, she said, is becoming “increasingly authentic”. “There are a group of young female comics who are talking about female issues openly on stage, which is a bit revolutionary, and talking about personal stuff like being fat and having periods.” She also includes material about adjusting to life in France. “I find French people love laughing at themselves, and how they’re seen through the eyes of a foreigner, and of course there is lots of humour in cultural embarrassments and linguistic difficulties.”

French people do not, however, generally share the Anglophone taste for raunchy humour. “Stand-up in America and the UK can include really blue sex jokes, but that doesn’t work in France, where they are more sensitive about sexual topics. There’s no French equivalent, man or woman, to Amy Schumer, for example. French people laugh about their manners and cultural expectations. They like puns and plays on words. They like to feel high-brow rather than low-brow.”

When it comes to lockdown and corona jokes, she says it is never too soon. “I don’t believe topics can be off limits. But if you’re going to make a joke about cancer, for example, it better be damn funny. I wrote a new comedy show about the confinement which I performed over Zoom twice during our lockdown. If we can’t laugh about corona, then it all feels really grim and heavy. Serious topics need levity from time to time.”

Lockdown arrived just as her maternity leave came to an end, so it has been some time since she performed for a live audience. “Most comics I know aren’t holding their breath for the clubs to reopen any time soon. Part of the magic of stand-up is having a conversation with the audience through your jokes. It’s the tension, it’s the atmosphere. I can look at you and hear you and talk to you directly. While that cannot be duplicated through online shows, I think we’re all getting creative about how to perform in this new world. I performed a new show over Zoom, which was a first for me, and my parents were able to watch me live from the States. There are definite benefits but, like many people in many industries, we have to pivot and create something new while we wait. Translating that into paid work, I don’t know ... but I hope so!”

Other stand-ups had already moved online before the Covid-19 crisis. French stand-up Swann Périssé is known for several things, not least her appearance in a publicity campaign against public urination in Paris. Dressed in an “evening gown” entirely fashioned from bright yellow lavatory paper, she caused quite a stir. Her comedy video in which she spoke about being sexually assaulted also raised eyebrows, and she has attracted much comment by displaying her enviable and beautiful figure in a series of outfits cut to enhance rather than conceal.

She is very much at home doing the unexpected. After she did a Master’s in communication at prestigious Grande Ecole Sciences Po in Paris, everyone expected she would pursue a career in law or politics. “But from the second year in Sciences Po, I knew I was going to be a comedian, so that’s what I did. I went to the Ecole Internationale de Théâtre Jacques Lecoq, and after that I spent some time doing stand-up in the US.”

Back in France, she has built a successful YouTube channel, writing, producing and performing her own comedy videos. She now has more than half a million followers. She touches on subjects including ecology, feminism, femininity, respect, creativity, ambition to be yourself, and independence. “Making dramatic situations funny is an amazing thing, so I know that everything bad will eventually be funny. Some of the things that work best on my videos are those that come out of anger about sexism – it’s how I fight back."

“It always comes out funny. Confinement has already produced lots of jokes, and in future we’ll be joking about how people didn’t change their lives.” She sees two basic reactions to the crisis. “Some people dream that it will lead to a better world. Others see that it has exposed the inequalities, the police violence, black market working, domestic abuse.”

The future of the industry

For comedians generally, she says lockdown has been a hard time. Working in entertainment is precarious by nature, and not many entertainers have savings behind them. “For club owners, it has been, and continues to be, tough. Who knows how they will survive? For me, the future is virtual. My YouTube channel has 600,000 subscribers and my stand-up will survive because I can do it live from my home – but it’s not at all the same as working live.”

Missing live entertainment? Why not delve into one of our recommended books from our monthly book review column