Escaped parakeets in France lead to flock of 8,000 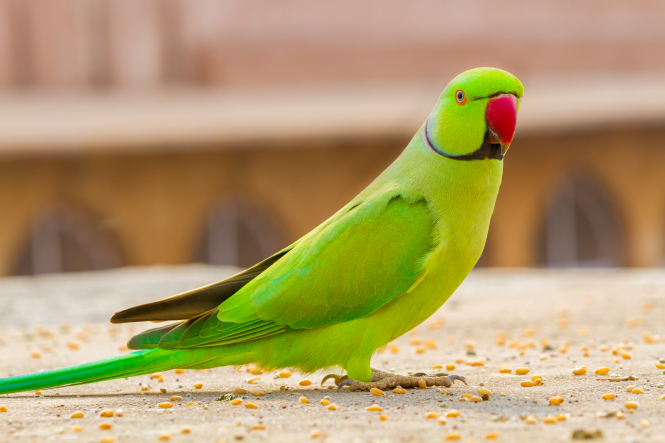 Rose-ringed parakeets do not pose a threat to other species Pic: Nila Newsom / Shutterstock

Descendants of a flock of rose-ringed parakeets that escaped from a Paris airport in the 1970s now number 8,000 in the city and surrounding area.

The population has grown considerably since a count in 2013 found 2,300, says the Ligue pour la Protection des Oiseaux (LPO).

The birds live wild but do not threaten most native bird species.

Originally from Sub-Saharan Africa and Asia, they are thought to have arrived in 1974 when around 50, imported for pet shops, escaped from cages at Orly airport, south of Paris.

In 1994, a similar escape happened at Charles de Gaulle airport, and the two populations have interbred.

Feral parakeet populations also exist in London, Brussels, Frankfurt and the south of Spain and Portugal, but are rarely seen outside cities.

In France, Nice has a well-established population, as do Marseille, Montpellier, Nantes and Lille, Frédéric Mahler of the LPO told Connexion.

“In general, in north west Europe, they are not doing any damage to other species.

Our concern was for birds which shared their nest areas – holes already existing in trees – but a study showed little impact on numbers, except for the Eurasian nuthatch, where other factors also come into play.”

In the south of Spain, by contrast, the arrival of parakeets has had a disastrous effect on a population of large bats, which sleep in the same sort of trees.

Warmer winters and an abundance of bird feeding tables are thought to be the reasons why the birds thrive in cities.

Many city residents are not aware of the parakeets which, with their bright green feathers and habit of staying near trees, are not easy to spot.

Those that do notice them are mostly happy to have them, as they bring a bit of exoticism to the city.

Complaints are generally limited to the noise they make at dawn and dusk, and their habit of raiding fruit trees.

“Most local authorities do not take any action against them, but there are a few, where after complaints from residents they have tried to move them on,” said Mr Mahler.

Methods include scaring the birds with fireworks and using nets to trap and move them. “As with starlings, the measures work for a bit, then the birds usually move back.”

In Brussels, the population of parakeets has stabilised due, it is thought, to a limited number of nesting sites and predators such as owls and sparrowhawks.

It is expected the same will happen in Paris.

Diary of a birdwatcher in France: The capture of 33 griffon vultures

Gardening in France: Autumn is the time to buy your bulbs