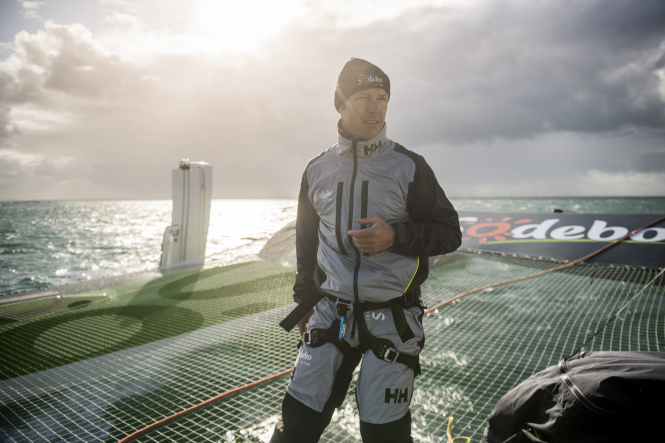 “I can be completely alone at sea for long periods without being lonely. I’m far more likely to be lonely on dry land,” he told Connexion.

“Going to sea is a choice to take up my relationship with nature again.

“This comes from my childhood and a troubled adolescence.

“When I discovered sailing, it changed my life. So when I find myself back in the solitude of the sea, in contact with nature, I’m at home.”

The fastest person to sail solo around the world also enjoys the minimalism of life on a boat – the small space and the lack of clutter.

“It is monastic at sea: you eat, drink, sleep, maintain your health and your phys-ical well-being – you check small cuts aren’t infected, ensure you have brushed your teeth, washed properly – and then you do the tech-nical stuff, deal with navigation, meteorology, maths, and you pay a little attention to emotions and sensations.

“And then, last of all, you’re in connection with nature, and can admire and watch it, marvel at it.

“In a way, it’s a bit cowardly when I put to sea because that’s what I love. My relationships with humans always work best on water.

“When I come back to land, I am lonely because the world economy is still not calibrated like life at sea.

“Everyone is trapped on their own economic ladder, climbing alone as best they can. It’s nothing to do with teamwork.”

When he is sailing with a team, he says people don’t have a choice except to live together and make it work. “In team sailing competitions, the interest isn’t in individual strengths.

“What is important are people’s weaknesses because they makes other people’s strengths valuable and this is what welds a team together, and a strong team will win.”

He says his own strengths are pugnacity and an awareness of what’s going on around him, combined with his close relationship with nature. “What we’re living now, we can only get through by working on our weak points, and by evolving, both personally and as a society.

“But it’s tricky for a French person: we love a massive revolution, and this is very romantic but usually goes nowhere. A 180-degree revolution lets off steam: it is seductive, it makes people feel like they are making progress and intellectually feels courageous, but very often leads nowhere.”

In sailing, he says evolution is more productive than revolution. “In sailing, you evolve, your skills evolve, boats evolve, the technology evolves... pugnacity, the ability to just keep pushing, often gets the best results.

“Now, our society needs to evolve, slowly, taking everyone forward together. The concept of revolution is bourgeois, it comes from people who are not in need.”

For Mr Coville, 51, sailing round the world alone is a luxury. “I have learned to run from toxic people, and only be around supportive people. My relationship with art is closer when I’m alone and don’t have to share or justify my reactions.

“When I’m alone, I like the picture, the book, the music, or I don’t. In the company of others, there is always their reaction too.

“People want to share their opinions about art, but it’s nice just to have your reaction alone. I even find it tricky to share music with 10,000 other people at a concert, but then I’m solitary.”

One of the things being solitary has taught him, he says, is that we are all unique, we are all different, and we should admire each other’s singularity.

“Even in a group, we are all alone, and we have to understand and live that fact fully before we can appreciate others. Lonely is being misunderstood, it is being surrounded by people who don’t see you and support you, who aren’t on the same wavelength.

“Solitude is when you’re in contact with yourself, and that’s a positive thing.”