14% drop in Paris office demand over next 10 years, study predicts 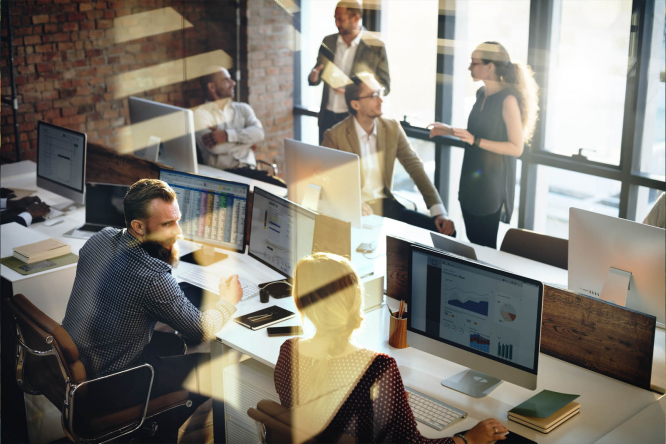 The move to télétravail working from home, boosted by the Covid lockdowns, could result in a 14% dip in demand for office space in Paris in the next 10 years.

A study also predicts falls, although smaller, in other regions.

The number of workplaces required could fall by more than a quarter (27%) if firms switch to two days of home work a week, the Institut de l’Epargne Immobilière et Foncière (IEIF) said. Demand for office space would then fall by 14%, it calculates.

The difference between the two figures is due to firms redesigning their offices for more meeting spaces, joint design studios and lounges for the three days when employees do come in to work.

Unions and bosses have been working to change the statutes governing employment contracts to take account of this, with several sectors already convinced that two days of working at home will be the norm.

The IEIF report said: “Over the last 10 years, there has been more and more working at home but before the lockdowns an estimated two-thirds of it was done on an informal basis. The legal recognition of home working means it is much more structured and will have more of an effect on the business property market.”

IEIF director general Christian de Kerangal told The Connexion everything showed that the fall in areas outside Paris, with the exception of Lyon, would be less.

“The data from Apple and Google looking at where people were using their phones after the first lockdown, for example, showed fewer people were staying at home in the regions than in Paris.

“In Paris, the average worker takes 45 minutes to get to work (in the regions it is less) so there is more incentive to avoid going into work in Paris than elsewhere.”

Mr de Kerangal said that, in his opinion, location would be the key factor in determining the future of office buildings, with those close to transport and services always likely to be in strong demand.

“Office buildings in the seconde couronne (the outer areas of Paris) built in the 1960s, 70s and 80s will probably be hardest hit.”

The deflationary impact on the market for office space is likely to take time, the institute says, both for firms to decide how much space they need and because of the length of commercial rent contracts, which can be for nine years. Knight Frank estate agents, which has an active business in office rentals and sales, issued a report on office rentals in 2020, which showed the market was flat.

David Bourla, chief economist and head of research at the firm, said: “Businesses are busy coping with the effects of the pandemic and have not been looking for new offices. There has been a slight uptick in the first quarter of 2021, in central Paris and the business quarter of La Défense, but I expect that it will only be in the second half of the year, when there are more people vaccinated, that we will get a good idea of what will happen.”

The main immediate effect of the crisis has been a shift in negotiating power from landlords to renters, he said.

“So far, prices have not fallen but businesses are able to get better facilities, such as more rent-free months at the start of contracts, or better services like access to canteens, than they were before.”

Mr Bourla said more offices will probably be turned into flats, especially in towns west of Paris, but he expected office rental to remain the norm. “There is a business culture in France which is against working at home at the moment, especially compared to the UK and Germany.

“But accommodation prices around Paris are so high, and a law passed in 2008 allowing conversions is having an effect, that I expect to see more business buildings turned towards accommodation.”

One tower per family in this noble medieval site in France
3 December 2021
More from Property
More from Connexion
Get news, views and information from France
Join the newsletter
Subscribe to The Connexion