Château for sale after more than 1,000 years in same family 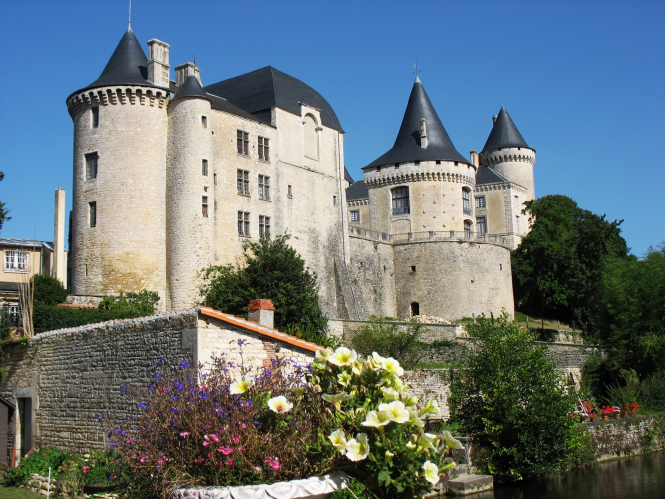 A Chateau which has been owned by the same aristocratic family since around AD950 is up for sale and could be yours.

The present owners of the Château de Verteuil, the Comte and Comtesse de La Rochefoucauld, were given the property by her aunt in 2000.

The Comte fell ill in 2018 and has not been able to visit the chateau, where he used to spend at least one week every month.

The Comtesse is unable to spend the required time on the administration of the building and 38-hectare estate. So they asked 58 members of the family if anyone wanted it – but all either declined or already owned chateaux of their own.

The Comte and Comtesse’s three children, two of whom are doctors and the third a humanitarian organisation worker, “prefer to invest in people rather than buildings”, the Comtesse told Le Figaro.

The chateau is on the banks of the Charente river, near the town of Ruffec in the north of the Charente department. The first stone-walled fortification was built around 1080 on the site of what had previously been a wooden structure surrounded by a palisade.

During the 100 Years’ War, the chateau was occupied several times by the English and ended up being demolished in 1442.

It was rebuilt, using original stones, before being partially demolished a second time in 1650 by French Catholic forces during the Wars of Religion.

The then Duc de La Rochefoucauld, exiled from Versailles after taking part in a revolt against Louis XIV, lived in Verteuil for seven years in part of the chateau which had not been pulled down, writing his famous autobiography Mémoires.

He later published a book of short sayings, Maximes, which is still available. One of the best known is: “Self-love is the greatest of all flatterers.”

During the Revolution, the chateau was again destroyed, in spite of one member of the La Rochefoucauld family, François Alexandre La Rochefoucauld- Liancourt, Duc de La Roche Guyon, being a leader of the 1789 events and fighting in the revolutionary army before fleeing to the United States.

A dozen of his cousins lost their heads to the guillotine.

He later returned to France under Napoleon and the restoration and was active in agricultural and prison reform before being stripped of official functions by Charles X. He retired to the country, and founded one of the first Caisses d’Epargne in France.

In the 1920s and 1930s, members of the family moved in artistic and literary circles in Paris with artists and writers such as Picasso and Hemingway.

Work to restore the chateau began after the Revolution, and it gradually took on the appearance it has now.

It has five towers and a watch tower on the skyline, and a triangular courtyard formed by the main building, the library – turned in the late 19th century into a sort of club for young members of the family – and the guardhouse.

The chateau, with an asking price of €2.8million, has had the main roofs restored by the present owners, who also put in new windows and central heating in the part of the main chateau they used.

Furniture can be included, which could be important.

The ground floor has a large dining hall, two large reception rooms, and a bedroom, while the first floor has two smaller lounges, and four en-suite bedrooms – including one that was used by the British Queen Mother when she spent a night there in 1980.

The second floor has another nine bedrooms.

Away from the main property, outbuildings have been converted and are suitable for events such as weddings and concerts for up to 250 people.

The chateau is a listed historic monument and the new owner will need deep pockets.

Estate agency Patrice Besse, one of the agencies with the chateau on its books, warns: “As always with these great houses, the charge for future work will fall on the future owners.”

Which came first – the White House or its French lookalike?