Downsizers: We swapped our big house in France for modern - and modest 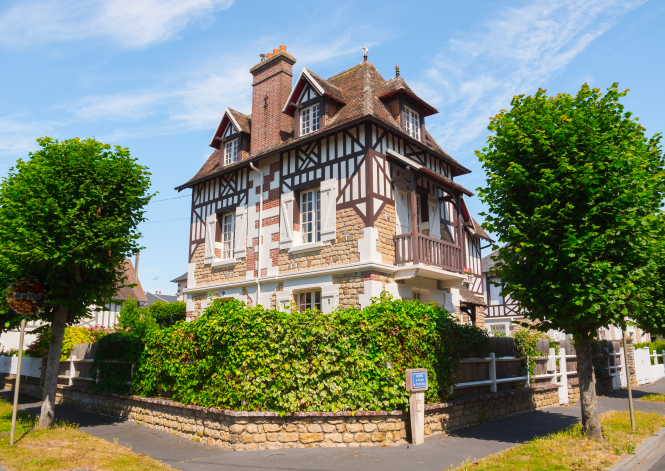 Matt and Louise Hollebon: ‘A mammoth task in the cold’

When Matt and Louise Hollebon came to France in 2016, they, like so many others who have made the move, had grand visions of settling in a barn conversion in the countryside with an attached gîte.

“We wanted something that was not too remote, and chose a house just 3km from the village of Bujaleuf in Haute-Vienne,” says Louise, 50, a former office manager.

The couple moved over in December 2016 and, while loving the aesthetic of their new home, found the lack of central heating more challenging.

“It takes practice to run a wood burner effectively, and although we had electric heaters, we could not have them on all the time,” says Louise.

“I’d be working with layers of jumpers and even gloves. I never felt warm.”

Over time, they also began to question their plans for renovation.

“Matt, who worked as a gardener in the UK, picked up some labouring jobs with a builder,” says Louise.

“He soon started to realise the magnitude of work that would be needed to convert the old stone buildings.

“We also started helping with some gîte turnarounds for others, and

questioned whether we would really want to host people in our home.”

The couple discovered that, while land looks good on paper, it can take a lot of maintenance.

“It would take at least an hour and a half, once a week, on the ride-on mower to keep the grass under control,” says Matt. “It was really hard to keep on top of.”

Despite doing some remedial work to the barn, the pair decided to shelve their plans and look for something different. “In 2020, house prices went up in rural villages as more people moved out of towns and cities, and we began to look around.”

They decided to put what could have been their ‘forever home’ on the market and, when it sold within a week, to find something local that was more manageable and, crucially, warmer.

“No property is perfect,” says Louise, “but our new one has oil central heating, is a 1980s construction, and is smaller, so we knew we were not going to get cold.

“We miss the bigger kitchen/diner of our old place, but we are in a much better location – in Bujaleuf itself, within walking distance of shops and with views of the lake. Plus, we have a manageable garden at last! We do not see our first home here as a failure, though. We moved often in the UK, and know how needs can change. We are really happy in our new home.”

Former charity development officer Gillian Jackson, now 70, had a similar experience. Her plan was to buy a house in France as a holiday home until she retired, after which she would live in it full-time.

“It was a 200-year-old stone house that had been renovated,” she says.

“It had 2,500m² of garden and was on the edge of the small village of Guitinières in Charente-Maritime.”

Holidays in France proved a success: Gillian would travel to the house several times a year, often with friends, to enjoy the glorious isolation.

“I looked forward to the day when I could come over to France for good,” she says. That day finally came in June 2015, but living in the house proved very different from holidaying there.

“When you live somewhere, you want to connect more with people,” says Gillian. “The village had just over 300 inhabitants and was very quiet.”

The house also proved rather big for just one occupant, and expensive to heat. It was the location that proved the final straw. “I had to drive 7km for bread. These things don’t seem insurmountable when you are on holiday, but when you’re living somewhere, they quickly take on more importance.”

Gillian put the house on the market, although it took a few months to sell.

“Those months were difficult,” she admits. “It is hard when you have decided to leave somewhere but you are not able to.”

Finally, in June 2016, Gillian, who now works as a coach and mentor, moved to her current home – a modern bungalow of 110m² and a manageable garden in the town of Mortagne-sur-Gironde.

“I can now walk to get bread, or essentials,” she says. “You meet people as you wander around – there is that human interaction. It is also close to the coast, the local restaurant and an épicerie – and it is just three minutes in the car to the port of Mortagne, which has everything you could want.

“Isolation feels wonderful when you are on holiday, but can prove too much when you live there.”

Isobel and Mike Evans: ‘We had no leisure time’

They moved to the country with grand plans to run a chambres d’hôtes, choosing a large property of 550m², with an additional 275m² of garage space, in Sallèles-d’Aude in the south.

It was the perfect ‘forever home’ –except for one thing. “Sadly, it did not have much land as it was a townhouse – just a tiny patch of garden and small terrace,” says Mike.

Nevertheless, the property proved popular with guests, something Isobel attributes to having the ‘wow’ factor, and the business thrived, but the property needed constant maintenance and the pair found running a chambres d’hôtes exhausting.

“We were always working,” says Isobel. “We enjoyed it but it was tiring. And we had no time to get involved in the local community in the way we would have liked.”

When Mike underwent chemotherapy for leukaemia in 2017, they put the property on the market, but it failed to sell.

Then, in 2020, Mike caught Covid and their incentive to move increased.

“He almost died,” says Isobel. “We knew we could not run the business with his health problems, so dropped the price and it sold quickly.”

The couple have since invested in a smaller property in La Tour-du-Crieu in Ariège.

Its proximity to Toulouse hospital, where Mike has ongoing treatment, is handy, and with less maintenance and fewer running costs, they can also afford to retire.

“It needs a bit of work, but it is all doable,” says Isobel. “I am really looking forward to enjoying the garden and – with our spare time – becoming more involved in local life.”

Rules get tougher on badly insulated homes in France

How to include a French holiday home in a UK will?