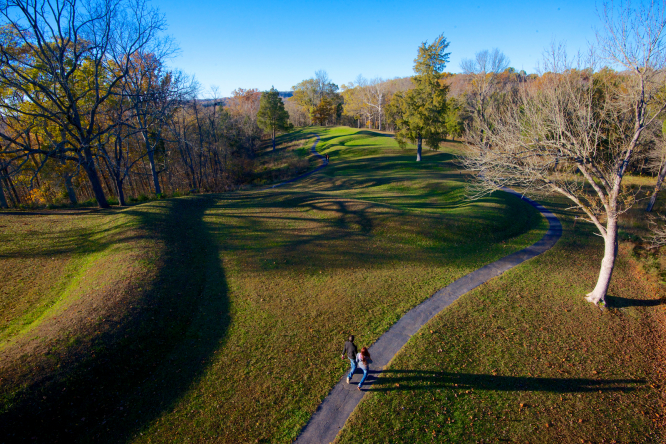 Serpent Mound in Ohio is the inspiration behind Nick’s effort in France Pic: Danita Delimont / Shutterstock

Having dug out a barn floor and demolished a roof, I still had a lot of building rubble to deal with: ugly, irregular and difficult to hide. What was I going to do with it?

The obvious answer was to take it to the tip, but I didn’t have a trailer and, besides, there was just so much of it.

The temporary solution I came up with was a lazy one: make a great, big, unsightly mountain on one side of the garden and forget about it.

I tried to ignore it but it looked like a bombsite. I considered sprinkling grass seed on top but knew deep down it was always going to look like an unsightly excrescence.

I wished nature would render it invisible – but it didn’t. As the weeds crawled over it, it just got uglier. We kept adding to it: branches, soil, anything that would not go on the compost or was too abundant to fit into the boot of the car.

I was increasingly unhappy about the situation. What do you do with an immense eyesore of assorted rubbish?

The answer came to me while flicking through a book: you turn it into a piece of land art.

I was fascinated by an aerial photograph of the Serpent Mound in Ohio in the US – a Native American earthwork of unknown date and origin.

That set me thinking: could I build a serpent mound of my own on a more modest scale?

It could be a raised pathway through the trees at the back of the garden. This was right next to the rubbish pile so I would not have to move the material very far.

I would achieve two goals at the same time: hide the junk and create a garden feature. Clearly, it would take some work, and that meant time not spent doing more important things.

However, the project did have one advantage: it was fairly mindless and it had no deadline. I could do half an hour of labouring here and there when I did not feel like doing anything more pressing.

I had to start by sorting out the mess. First, I fished out the biggest blocks of masonry and laid them along the path of my serpent mound. Anything that was easily smashed up was broken into smaller pieces with a two-handed mallet – broken roof tiles, for instance.

The sorting went on over the winter months. Anything organic went on to the compost heap. Bits of wood could be used for kindling in the stove. I was careful to sieve and save any soil because that would make an all-important top layer along the mound that I could grass over.

Gradually, the mound rose 30cm above the surface of the ground – stretch it out in a ribbon and you can hide a lot of rubble in this way. I kept the 50cm-wide top fairly level so it would make a comfortable path to walk on.

When the last of the rubbish was tipped from the wheelbarrow, I compacted everything as best I could and tidied up the sides. Then I tipped fine soil all the way along the mound, waited for rain, and scattered grass seed that promised to grow well in the shade.

I used the same seed to grass over where the rubbish mountain had been. Today, that part of the garden is a vision of green and beauty, with not a building block to be seen.