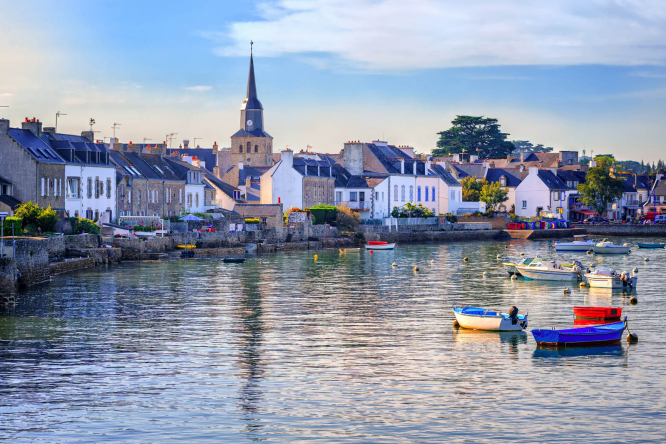 'Overall, 13% of properties in Brittany are second homes, rising to more than 20% and even 80% in popular seaside areas' Pic: Boris Stroujko / Shutterstock

The move for a regional resident status in communes with a severe housing shortage would mean only people who had lived there for a year could buy.

Nil Caouissin, newly-elected councillor for Union Démocratique Bretonne (UDB), made the demand in the run-up to June’s regional vote, saying it would protect prices and reduce the lack of housing due to second- home owners.

Mr Caouissin, a history, geography and Breton language teacher, said: “There is a growing population as global warming makes a mild climate attractive. We have a long and beautiful coastline and property has been relatively inexpensive.

“Overall, 13% of properties in Brittany are second homes, rising to more than 20% and even 80% in popular seaside areas. They are only lived in for three months of the year.

“Competition from wealthy second-home buyers puts prices up, so lower-income residents can only find housing a long way from their work.

“Mayors build homes in their communes, but that uses up valuable agricultural land.

“If we want to house the growing population decently, one solution is to turn holiday homes into main residences.”

Owners would not be evicted: “It would be gradual. A second home coming on to the market in communes with a property shortage could only be sold to a full-time resident. I realise it is restrictive, but we need priority for full- time residents.

“The idea is not targeted at the British, or any other population, and anyone who wants to make Brittany their permanent home is very welcome.”

He says other countries have such schemes, including a north Italian region and Jersey, where the full property market is open only to those who have lived there continuously for 10 years.

Franck Maussion, Brittany president of the Fnaim estate agents’ federation, said: “When you try to put a straitjacket on the market, people will look for any means to get round it, especially since everyone is happy to sell for more money.”

He said people would have to rent for at least a year to be able to buy, but the rental market was also under pressure.

Mr Caouissin said it needed “a political response as the situation is potentially explosive”.

While he had not heard of any damage to second homes, he said: “There is resentment, because suddenly locals cannot afford property.

“Their anger can be irrational, directed towards the Parisians, sometimes the British, though it is not the fault of any population in particular.”

UDB previously had no council seats but was part of ecologist list Bretagne d’Avenir, which had the proposal on its election manifesto and which finished in third place with 20% of the votes, entitling it to seats.

Council leader Loïg Chesnais- Girard, who is expected to keep his post, said in a statement the plan was a dangerous breach of the republican principle of equal rights, doubtful in French and European law, ineffective, and contrary to Brittany’s spirit and welcoming values.

He prefers urban renewal and separating land from house ownership: a commune owning land could cut buying costs by 30-40% and give the commune a say in ownership.

Even if not taken up, Mr Caouissin said the plan might interest other regions.

“Savoie, the Pays Basque and most of the coastline have similar problems,” he said.

Aerovillages project in France: Housing estate with planes in garage
20 January 2022
More from Property
More from Connexion
Get news, views and information from France
Join the newsletter
Subscribe to The Connexion