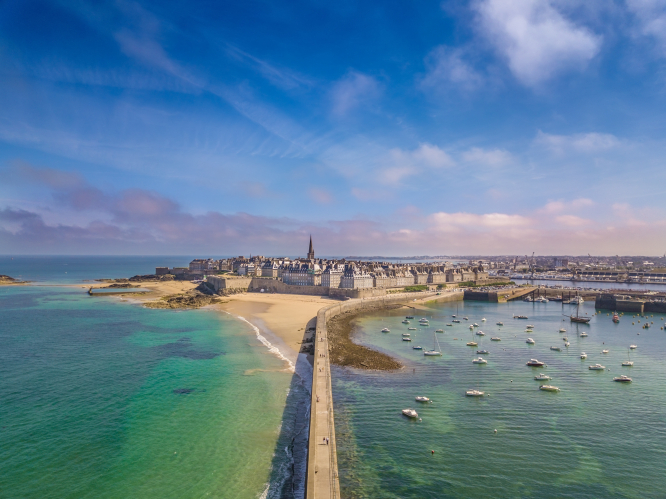 The Breton town of Saint-Malo stands on a granite promontory and clings to the coastline like a mollusc to a rock, its history and character inextricably linked to the sea. Malouins (residents of Saint-Malo) are rightly proud of their maritime history, and especially of the town’s corsairs, who made fortunes from naval plundering during the heyday of privateering in the seventeenth and eighteenth centuries.

But one person’s privateering is another person’s piracy. So what exactly is the difference between a pirate, a corsair and a privateer? To be frank, a privateer is a pirate with officially stamped papers. And while the origins of the term corsair lie in the Mediterranean more than on the Breton coast, this is the name most frequently applied to Saint-Malo’s maritime heroes.

The town’s most revered corsairs were licensed by the king and therefore permitted to plunder. In this vein, they were required to raise their true colours rather than the Jolly Roger before opening fire.

Privateering licences stipulated that the spoils of captured ships had to be turned over to the navy, who distributed a portion to the king, some to the crew, and the rest to the shipowner or armateur.

This is the official and above-board version. In reality, the treasure seized from ships captured at high sea would often be smuggled to shore, the proceeds side-stepping the monarch altogether. With the attacked ship and crew lying at the bottom of the sea, there was no one left to tell the king what booty had slipped through his fingers.

For a few centuries Malouin privateers were the bane of the English. Corsairs slipped into the Channel at night to intercept English merchant ships groaning under the weight of precious cargo from the far east and heading for Portsmouth. It was mainly for these misdemeanours, meted out so close to home, that the good folk of Saint-Malo had to build ramparts and offshore fortresses. Everyone knew where the pirates called home, and so they needed to defend their territory on land for crimes committed at sea.

The riches Saint-Malo’s corsairs acquired were often invested in building magnificent mansions. The town’s most prosperous privateers had a monarch’s mandate to rob treasure-laden ships, so what better way to advertise their spectacular wealth than with a townhouse fit for a king? You can still visit these mansions today, called malouinières, both inside the city walls and in the surrounding countryside (see right for the Hôtel Magon de la Lande).

Two of the town’s most prosperous and successful corsairs were René Duguay- Trouin (1673-1736) and Robert Surcouf (1773-1827). Duguay-Trouin’s family operated a successful shipping business and the young René joined the French Navy at sixteen. By eighteen he had been made captain of a 14-gun vessel, and in 1692 Louis XIV gave him command of a 40-gun ship, from which he captured five enemy ships in the English Channel.

According to one rather indelicate account by a nineteenth-century author, despite D-T’s capture in 1694 by an English admiral, the corsair escaped from a Portsmouth prison with the help of a Devonshire merchant’s adulterous wife, captured a small ship laden with cooked meat and a keg of good English beer, and sailed back to Saint-Malo to resume his illustrious career. You can admire a statue of this bon viveur in the old town near the quay Saint-Louis.

Robert Surcouf, born exactly a century later, earned the title of Roi des Corsairs, King of the Corsairs, in a career which saw him capture 47 ships, including the East India Company’s 1200-tonne ship, the Kent. A bronze statue of this Malouin privateer stands in the Jardin du Cavalier. In the latter part of his life, however, his spoils extended beyond standard pirate treasure.

From 1815 to 1821 Surcouf commissioned at least six illegal slave-trading expeditions to bring enslaved Africans from Gabon to Cuba and Philadelphia, amassing a great fortune in the process.

These real-life Jack Sparrows are just two of the town’s famous corsairs, and their stories represent a mere fraction of Saint-Malo’s rich privateering past. A visit to this granite outpost of Brittany will reward the visitor with even more insight, to see for themselves the privateers’ legacy on land and at sea.

This floating museum, a replica of a corsair frigate from 1745, is packed full of stories and objects that reveal the lives of the 240 crewmen who would have sailed the oceans in the original frigate more than 200 years ago. At 47 metres long and with three masts, it is the third largest traditional sailing boat in France.

Proof if ever you needed it that privateering had considerable financial fringe benefits. Corsair François-Auguste Magon de la Lande had this spectacular mansion built in 1725. As corsair to Louis XIV, and director of the French India Company, he clearly had cash to splash on land.

This fabulous 59-room museum reveals all sorts of buccaneering booty, including spices, fine porcelains and treasure chests, while a guided tour will afford access to the mansion’s hidden staircase and subterranean cellars.

6 hours ago
4
How will foreign visitors to France use the health pass for going out?

Vibrating vests let hearing-impaired feel music at concerts in France
21 July 2021
More from Explore France
More from Connexion
Get news, views and information from France
Join the newsletter
Subscribe to The Connexion