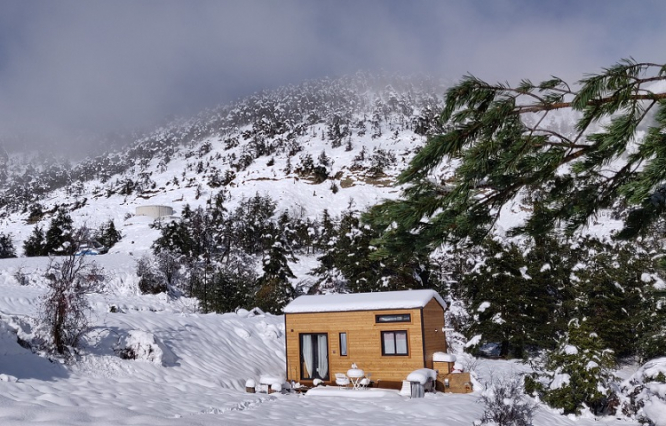 Yes, you can live the dream in your own little house on the prairie ... or wherever
By Brian McCulloch

It is called a Tiny House and the idea came from America.

In France, the initial reaction to the Tiny House was incredulity, but slowly the micro-maison became a symbol of a less-consumerist life and a movement was born.

You can build your own, but Quadrapol has been building Tiny Houses for four years and demand is steady.

Owner Frédéric Robert says not all buyers of these pint-sized properties – around 8-20m², plus mezzanine – do it to oppose consumerism.

“We have all sorts of profiles among people who have bought our houses,” he said.

“Some do it because they want a more simple way of living, while for others it is for other reasons, like their partnership is breaking up. For others again, it is the most simple way of having somewhere nice to live, especially if they have land.”

Quadrapol stresses that living in a wooden Tiny House is good for the environment, as it says the cement industry is a major contributor to CO2 emissions.

As with many new ideas, the properties fall into a judicial grey area, but Mr Robert said the most popular models are built on 4-7m trailers and are treated like caravans.

“In most areas, you can keep a caravan on your ground as long as you move it every three months,” he said.

“Otherwise they fall into a grey area similar to mobile homes, and also yurts, and you have to negotiate with the local mairie, but most people do not have problems.”

The concept is to have all the conveniences of a modern house in a very small area.

“Our offer starts from a basic shell to a keys-in-hand Tiny House with full certified electricity, plumbing and heating,” said Mr Robert.

“The architecture can be just about anything you want, although if you want it on a trailer, it has to be of a size where it is road legal. Our main business is building wooden houses and we take the same care with the Tiny House as a normal-sized one.”

Another builder of Tiny Houses is Denis Courcol, who has a company called Tiny House Côté Bassin at Landiras on the Bassin d’Arcachon.

His buildings are made to look like the oyster farm cabins found around the basin – but he has run up against town planners who seem determined to ban the Tiny House concept.

Around Arcachon, the building regulations are very strict, he said, and departmental urban planners have issued flat refusals to Tiny House projects.

“They say that a Tiny House is either a caravan, which cannot stay in a garden longer than three months, or a mobile home, which has to be on a designated camping site.

“And, even worse, in places like Bordeaux, where there is a great shortage of accommodation for students and a Tiny House could provide a solution, we come across the same refusal, word for word, because it is ‘a departmental decision’.”

Most of his buyers have been from outside the Arcachon basin area and have managed to reach agreements with their communes.

Mr Courcol, who also works as a “consultant engineer and problem solver” for builders, said the anti-consumer philosophy attached by some to the Tiny House movement was mainly from people who built their own, rather than people who bought one.

“The concept is great and adapts to all, from people who do it for environmental reasons to others who want to buy what they see as a solution to their housing needs.”

He added that attempts to get MPs and the government to change the situation have not been successful.

“They are afraid of upsetting the old rules for mobile homes and caravans, aimed at the travelling community, which they think work,” he said.

He has written to the préfet of the Gironde department urging change.

Both companies can help with arranging bank finance and insurance if required.

Or you can buy books on how to build your own and get legal advice and tips on how to insure your new home.

Our Home 1: We love our cosy tiny cabin in the mountains

Living in a Tiny House for three months has been delightful for 35-year-old Cathy Pasca and her partner David Colom.

“Both of us spend most of the day either working or outside in the mountains, and so to come home in the evening to a warm, welcoming small area is wonderful,” said Cathy.

“We were apprehensive to begin with, but it has turned out better than we imagined.”

She said she had always lived an unsettled life, moving at least 15 times into different jobs and situations, so the mobile nature of the Tiny House was attractive.

In addition, her first experience of buying a house had been a financial disaster.

“The property downturn hit where I was living at the time in 2010, just when I had to sell, and I lost money,” she said.

“That experience vaccinated me against the urge to invest in bricks and mortar again.”

Their Tiny House is placed on land at 1,000m altitude owned by friends outside their village in the mountains north of Cannes and they have hooked up mains electricity and water.

When their finances improve, they intend to install a solar panel system for electricity.

“We explained what we wanted to do at the mairie. They were very supportive and we just had to make a declaration,” said Cathy.

“The fact that we are running a small grocer shop in the village and most people know us probably helped. It is a small village and people look out for each other.”

Their house is six metres long by 2.5 metres wide and sits on a boat trailer.

Neither Cathy nor David has yet taken the test for the E category driving licence they need if they move the Tiny House, but they have lists of people who are happy to move it for them if they need to.

The first heavy snow of the winter arrived in November – but it has not changed the couple’s opinion of their mini-home.

“We felt absolutely warm and safe inside the house,” said Cathy.

“If anything, the house is a bit too warm, even for someone like me who feels the cold, and we have to regulate the electric heater so it is on its lowest level and does not run all the time.”

Another concern was that the limited space would lead to tensions, but Cathy says that has not been the case.

“Coming home is like being in a cocoon so we both work at keeping that."

“Plus, when you are in such a small space, you do not spend a lot on furniture and other things, so we have more personal space than you think.”

And, she said, the Tiny House has another major advantage over traditional properties – “housework is done in minutes, not hours!”

Samuel Tiellandaer and his wife Mandine were looking for a solution to provide a holiday home on land they own near the Bassin d’Arcachon when they came across the tiny house concept and opted for one that is designed to resemble an oyster farmer’s cabin.

They say it is a perfect solution for weekends and longer holidays.

“It is true the space is limited but it is well thought out and so it seems bigger than it is,” said Mr Tiellandaer, pictured above and below in their tiny home.

“We often have four people in here – the couple have a daughter who frequently brings friends – and yet we don’t have the feeling we are falling over each other.”

The house was made by the Tiny House Côté Bassin company.