France firms urged to use lunch vouchers to save restaurants 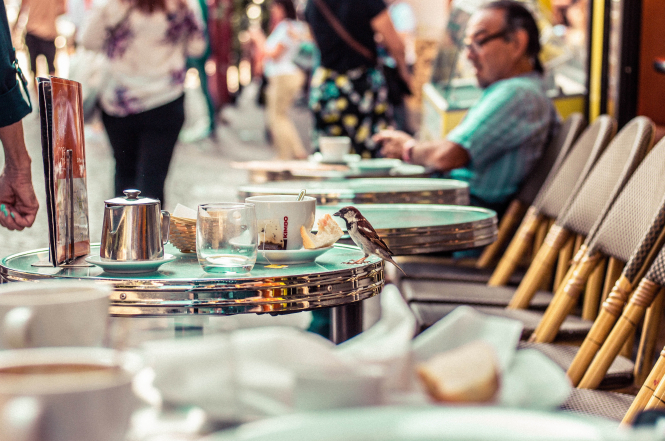 Do your employers give you tickets restaurants? The daily usage limit has been doubled. Pictured: a small bird enjoys breakfast in Montmartre, Paris, France.
By Connexion Journalist

Tickets restaurants are a benefit that employers can choose to give to employees if there is no work canteen. The vouchers do not have to be declared by employees for income tax. They can be used in restaurants or food shops, including supermarkets, and there will be a sticker in the window if they are accepted.

They have been in the news as Prime Minister Edouard Philippe announced the daily limit for voucher use would be doubled from €19 to €38 in restaurants and this would be extended to include weekends and bank holidays. They can be used exceptionally, therefore, for family meals out. The aim is to encourage people to spend in the hard-hit restaurant sector. Vouchers not used during confinement can be spent, injecting money back into the economy.

More than 3.5million employees have luncheon vouchers and can shop or eat in more than 180,000 outlets and restaurants across France. Employers must finance at least part of the tickets, though a balancing amount may be taken out of the worker’s salary. Within certain value limits, there are no social charges payable by the employer.

Behind the scenes at Paris restaurant La Buvette PLUS exclusive recipe

How did the vouchers start in France?

One voucher is given per working day, available in paper form, similar to a cheque book, as a smart card, or as a phone app. They are valid for the year in which they are given and up to January (in some cases February) of the following year. Use in shops is limited to food and a €19 payment limit is still in place there.

Are there any laws for having a garden barbecue in France?

The idea came from the UK following the creation of the National Luncheon Vouchers Company in 1954. France introduced a system of bon repas in 1957. Although many employers choose to offer them, helping towards employees’ meals is not an obligation on firms. However, the law states that there should be a dedicated dining room if 25 employees or more want to eat in the workplace. Smaller firms are also expected to provide at least some part of the premises where people can eat.