Got it taped... art of retro music recording 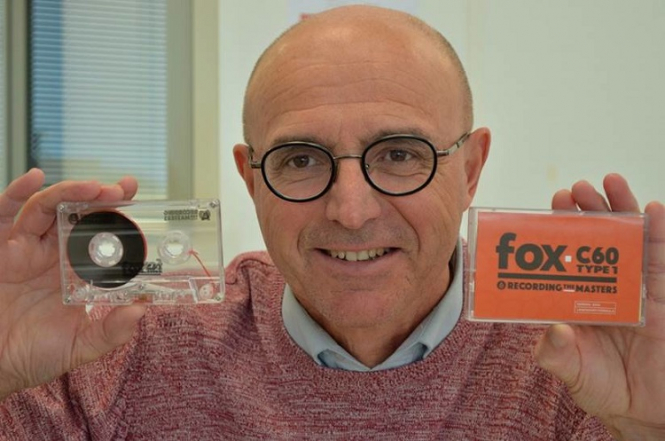 Jean-Luc Renou, of the Mulann Group, with his company’s latest product
By Connexion journalist

In the past, there was a real thrill watching the little wheels spin while listening to recordings of your favourite music.

Now an updated formula of the famous BASF tapes, once reputed to be the best for sound quality and longevity, is available.

Recording The Masters, part of the Mulann Group, is the only company in Europe making cassettes, at its factory at Avranches in Normandy.

The Mulann Group specialises in making the magnetic strips found on bank and other cards. It began making large reel-to-reel tapes for use in recording studios, archives and film, and for military and space use, before restarting cassette manufacture too.

Company head Jean-Luc Renou told Connexion: “We started picking up from the market the fact that cassettes were becoming more and more popular again.

“Obviously, the stocks were running out because they are not being made any more, and, as someone who always likes the analogue sound, I could appreciate that there might be a niche market, which is why we decided to take the chance and see if we had buyers.”

Tapes have been on sale since last November and buyers have been in two groups: the first in their 40s and above, who remember tapes from their past and who still have good quality tape decks.

The other group are in their 20s and 30s, who have become aware of the softer sound produced by tapes, when compared to digital music.

Only one company, from Japan, is making new high-quality cassette players, but Mr Renou said many people still had old players.

“Often they work straight away or just need a little bit of attention, like having the heads cleaned, and there is often someone in town who still knows how to fix them,” he said.

“They are pretty easy to understand, and if they go through a good amplifier and good speakers, the sound can be exceptional.”

The company makes the tapes from scratch, starting with rolls of plastic similar to those used in agriculture for greenhouses.

Iron oxides and other chemicals are ground down and mixed with solvents to make a slurry, which is then used to coat the plastic and dried before the rolls are sliced into the correct width. “It is a niche market and there are very few people who know how to use the machines, so they feel individually responsible and the quality is very high,” said Mr Renou.

The reel-to-reel tapes the company also makes are used to archive music, because many people distrust digital recording, where formats change regularly.

Large recording studios are also going back to using them, because the widespread use of digital recording technology has reduced the difference between amateur and professional standards.

“They have found that by using tapes they can produce recordings showing all their skill and passion, something digital recording has equalised,” said Mr Renou.

The final application is with military and space researchers, both of whom need to be able to record sounds from space or under the sea with as little distortion as possible.

“They are all niche markets, and probably will never be huge again, but we are happy to be in it,” he said.