Are snow chains a permitted alternative to winter tyres in France? 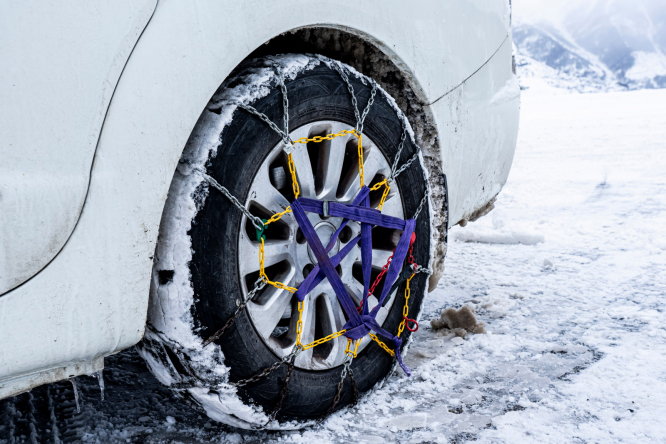 In affected areas, the car should have metal or textile chains (or ‘snow socks’) on at least two powered wheels, or four winter tyres Pic: elinaxx1v / Shutterstock

Reader question: Will it be legal this winter to carry snow chains, as opposed to having expensive winter tyres (I understand the rules are changing)? I live in Haute-Vienne and we rarely get conditions to warrant them.

Yes, you can use snow chains rather than winter tyres.

Before now, there has only been an obligation to use either of these on certain roads, in snowy conditions (at whatever time of year), where you see signs saying B26 équipements spéciaux obligatoires.

As of this winter, 48 departments, including Haute-Vienne, have the right to require similar measures from November 1 to March 31 where you see these new signs in place.

Where this applies, a law says you can be fined if your car is not correctly equipped. This applies whether you are local or a visitor.

However, there is a year’s grace period without penalties covering this first winter of the rules.

In affected areas, the car should have metal or textile chains (or ‘snow socks’) on at least two powered wheels, or four winter tyres.

Winter tyres may include ones stamped ‘M+S’ (mud and snow) or, preferably, 3PMSF (three peaks mountain snow flake), with the latter to be obligatory from 2024.

‘Four seasons’ tyres are an option, designed to work as winter tyres but also suitable for other times, but are only suitable if they have the same logos.

According to the Interior Ministry’s road safety department, chains are very effective, both on snow and black ice, but they can sometimes be complicated to put on.

It says you should anticipate this difficulty, in cold conditions on a snowy road, and be sure to practise beforehand. Prefects have been drawing up lists of communes concerned by this, but signs at the start and end of the zones are obligatory where applicable.

There is, in theory, a €135 fine and a potential risk of having the car immobilised.

The latter may involve it being clamped, but otherwise means your carte grise (registration document) is confiscated and you must leave the car where it is, or nearby, until you have obtained chains or winter tyres for it.

A map of areas concerned can be found online here.

6 hours ago
4
Undelivered letters: Why is France’s postal service struggling?

Aerovillages project in France: Housing estate with planes in garage
20 January 2022
More from Travel and Transport
More from Connexion
Get news, views and information from France
Join the newsletter
Subscribe to The Connexion