What's On in April 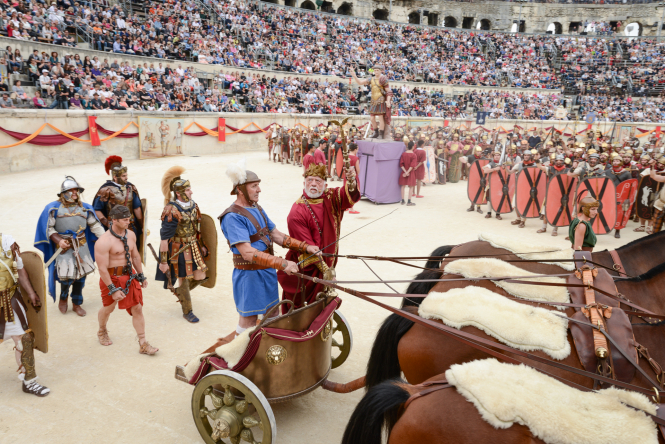 Expolaroid, Photography festival across France throughout April Appreciation of instant photography is not restricted to mobile phone apps these days – old-school Polaroids are still in vogue. The month-long Expolaroid series of exhibitions around France aims to bring together fans of the instant imagery form, with Nantes, Rennes, Caen and Clermont-Ferrand among the locations.

As a sister act to the already iconic film festival, Cannes shows its TV hand for the inaugural Canneseries which highlights new and upcoming TV shows. With on-demand boxsets and streamed series now so en vogue, the initiative is certainly timely.

While many elements of the festival will be of use to industry professionals, the humble telly viewer is well catered for too, with a world première of Versailles season 3 and many other screenings open to the public. Check website for the full programme.

This futuristic exhibition at the majestic Grand Palais asks many questions about the reign of technology and just how creative a robot can be. These include: Can a robot replace a painter or sculptor? And what about artificial creativity?

The exhibition features artists that invented machines to create art (by computer software or robots designed and programmed) and will showcase about twenty artistic installations generated between 1989 and 2017.

Any excuse to enjoy springtime in Paris... 2018 marks the 20th anniversary of Art Paris Art Fair, held in the glorious surroundings of the Grand Palais and playing host to 142 galleries representing more than 990 artists from 73 countries.

Since its foundation in 1999, the fair has established itself as Paris’ leading modern and contemporary spring art event. It is not only aimed at dealers but also amateur collectors and art fans keen to survey the current artistic landscape.

This year sees a different approach in one section of the fair – exhibition curator and art critic François Piron will provide an overview of the French art scene by selecting 20 key artists’ work.

In addition, Switzerland will be the guest country, its diverse art scene championed by curator Karine Tissot, while young artists and emerging galleries will gain exposure in the Promises area.
www.artparis.com/en

Whether for moral or lifestyle reasons, vegetarianism and veganism numbers are growing fast in France. The third annual Veggie World exhibition provides the opportunity to discover 130 exhibitors and more than 1,000 products, from food to cosmetics, hygiene, fashion and books.

Learn about the vegan lifestyle and take advantage of exceptional offers.

40,000 registered runners – some much faster than others – from over a hundred nations descend upon the French capital for a picturesque 42,195 km road race.

Every year since 1976, runners can combine a weekend in the City of Lights with the opportunity to pound the pavements and roads on the likes of the Champs-Elysées, place de la Concorde, Rue de Rivoli and Place de la Bastille.

Rodin, Under the Photographer’s Eye, Orléans until April 15

Photographer Emmanuel Berry was given access to the Rodin archives in the reserves of the sculptor’s workshop in Meudon for a year, and the resulting images form this exhibition at the Musée des Beaux Arts.

Photographs taken by the likes of Druet or Bulloz taken during the sculptor’s lifetime, as well as 24 original plaster pieces and bronzes, provide clever juxtaposition to the contemporary lensman’s work.

The scallop is a treasure of the Bay of Saint-Brieuc and throughout the weekend visitors will be able to join sea excursions aboard the Vedettes de Bréhat to get a close-up look at the shellfish or to see local fishermen in action.

There will also be plenty of scallops for sale, an art and crafts village with 60 exhibitors, a fishing gear exhibition and demonstrations of seamanship and rescue by students of the Paimpol Maritime High School. All this plus live music.

Every April since 1991, the Somme Bay has welcomed bird spotters and nature lovers for a nine-day celebration of the natural world.

There is something for the whole family, from diverse documentary films and photographic exhibitions to drawing classes.

You can also get up close to nature on foot, horseback, or by boat, with a guide.

It is certainly not the biggest rock festival in France, but possibly the oldest. For the past 41 years, the Printemps de Bourges has been packing in the punters for the best, the latest and greatest that the French and international music scene has to offer.

Since 1904, the Foire de Paris has been showcasing the very latest products and services to help visitors improve their everyday lives. The range of items, from great innovations to small curiosities, is varied and ever-growing – as are visitor figures: last year saw 600,000 visitors and 3,500 exhibitors on the 220,000m² site.

Gers is perhaps the unlikely location for a three-day celebration of gypsy and Balkan folk music (a Tzigane is a Hungarian gypsy). This year’s 11th edition of the festival will feature a programme that blends legendary artists and young virtuosos.

A three-day pass for all shows if booked in advance costs just €48.

The historic Magny Cours race circuit in the Nièvre department welcomes petrolheads keen to pay homage to the cars and drivers of yesteryear.

As well as lots of racing and car exhibits (including a pre-war section), there will also be a ‘merchant’s village’ showcasing everything from clothing to memorabilia.

The guest of honour is Belgian driver Jacky Ickx, the six-time Le Mans winner, 25-time podium finisher in Formula One and winner of the Paris-Dakar rally.

Often called the ‘Rome of France’, the city of Nîmes in the Gard department boasts the world’s best preserved Roman monuments, including the amphitheatre (Arènes).

Every year the Roman era is recreated with an epic-scale, historic reconstruction spectacle featuring equestrian performances, displays of chariot fighting and gladiator fights on horseback or on foot, as well as other entertainment in the town centre including parades. A gladiator school allows visitors to try out weapons and practise their skills.

Various locations around the French Riviera’s elegant city-State will host a series of springtime classical music concerts, musician conferences and masterclasses. Founded at the request of Prince Rainier III and Princess Grace in 1970, the festival is internationally renowned and includes performances from some of Europe’s greatest orchestras.

The Napoleon I museum, built in 1986 in the Louis XV wing of the magnificent Fontainebleau castle in Seine-et-Marne, aims to “present the First Empire in its many facets” and retraces the dazzling career of the emperor and his family via painted and sculpted portraits, weapons, clothes, objects of art and graphic creations.

It was closed for major renovation since last May, but has recently reopened with improved lighting, a rejigged layout, clearer descriptions panels and, most importantly perhaps, even more fine artefacts belonging to or pertaining to the diminutive leader.

The collection has been enriched by ninety new acquisitions, including Sèvres porcelain classified as a national treasure and a miniature ivory by Jean-Baptiste Isabey. Among the must-see items in the museum’s collection is a gold bay leaf from Napoleon’s coronet.
www.musee-chateau-fontainebleau.fr

events
what's on
More from Our Pick
More from Connexion