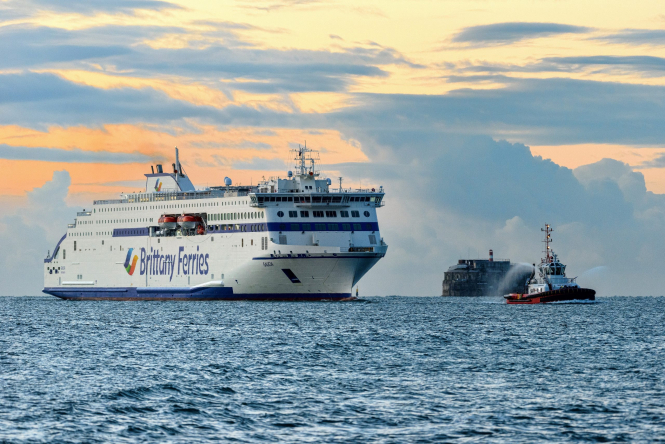 By Liv Rowland and Thomas Brent

A Connexion reader has told how he was charged an extra €101.22 by Orange on his phone bill after a recent Brittany Ferries return trip between France and the UK - despite not actually using his phone while travelling.

This is because phones used with mobile data on board connect via a costly satellite service, which is typical when ships are at sea away from land-based phone masts.

Reader Tony Hillyard, 73, claims he did not receive sufficient warning of this and feels “fleeced” by charges which he says he incurred despite not actually using his phone.

Mr Hillyard, who has lived in Manche (Normandy) for over 20 years, was travelling to the UK for a family emergency and said he was not aware of receiving any warnings by Brittany Ferries of the charge.

He was, however, sent a text by Orange “welcoming him to a satellite system”, but he said it made no obvious warning of a possible €50 bill per crossing.

“If there were other warnings they were no doubt buried in the depths of the terms and conditions that nobody is intended to read,” he added. [Editor’s note: We have seen the text and note it did, however, include basic information, in French, on tariffs for calls, texts and ‘mobile internet’].

When he queried the fee after getting his bill at his local Orange shop, he was told it was due to his phone connection being transferred to a maritime service. “They said it was my fault for not turning my phone reception off,” Mr Hillyard said.

The satellite service that mobile phones link to on Brittany Ferries crossings is run by the US company Skybridge and, said Brittany Ferries head of external communications Nigel Wonnacott is “not based anywhere [geographically]” as such. As a result it falls outside the benefit of limited roaming charges within the EU, which French mobile firms still extend to post-Brexit UK.

The result is that if you leave your phone using mobile data on board a ferry your phone company will charge you at its maximum, international rate, which is often high.

Charges can be incurred even if you do not use the phone, due to apps sending and receiving data automatically.

Brittany Ferries, and several other ferry firms, do however provide free onboard wifi for passengers who wish to use the internet.

Mr Wonnacott said the fundamental difference between being on a ship and being on land is that “on land you benefit from a huge network of cables, hubs, towers and other infrastructure that provide a widespread and relatively cheap service”, whereas the only way to get data while at sea is directly from a satellite.

If a customer leaves data roaming working on their phone, they connect directly to a satellite service, whereas for onboard wifi Brittany Ferries is effectively the service provider, he said.

The ferry firm has a deal to take a certain bandwidth from a satellite, which it then divides between wifi used by the crew, and wifi for passengers. For the latter there is either a free or ‘premium’ paid-for service, depending on the level of usage passengers require.

The spokesman said fees charged by phone companies if customers leave data roaming on are “independent from our control” and “we certainly don’t make money from it.”

He added: “We do make it very clear to people that they should turn mobile data off to avoid excessive charges from their mobile phone operator.

“We do it on our website, via pre-departure messages to passengers and via announcements on board. Furthermore, your mobile phone provider should send you a message informing you of the same.

“For example, I was on board a ship from Spain to the UK last week. The announcement made it very clear that flight mode should be operated to avoid at-sea roaming charges from various mobile operators.

“I kept my data on for a little longer than I should have after departure from Santander. My phone beeped with the message from Three which said, ‘it looks like you are on a ship’, followed by information about roaming charges coming my way if I persisted.”

He said however the company does “appreciate how frustrating it is to be hit with high charges from your mobile phone operator”, which is why it offers advice and an alternative.

A statement on the website of P&O Ferries similarly warns of the “quite expensive” charges that can be incurred if passengers connect via satellite, in this case a service provided by Norwegian firm Telenor Maritime.

It adds: “All charges are determined by your mobile service provider and will be billed to you on your regular phone account.If you do not wish to use this service, please remember to switch off your mobile phone while at sea.”

Several Connexion readers report the same issue on crossings with other ferry companies.

One said: “On Irish ferries from France, almost instantly as we left the network in France I had a bill of €22 outside my usage and was then warned. It’s outrageous, especially as there is only one hour of free wifi onboard for a 17-hour crossing. I can only imagine what the bill would be if your phone mobile company doesn't warn you. Turn off roaming as soon as you leave port.”

Another reader, from the Alpes-Maritimes, estimated she had received a fee of just over  €100 when she left her phone with data switched on, on a Corsica Ferries crossing to the island.

“I do not remember receiving any warning about it, though I could have missed it I guess.”

The problem arises if you leave your smartphone switched on, with data roaming permitted, so the solutions to avoid these charges include: