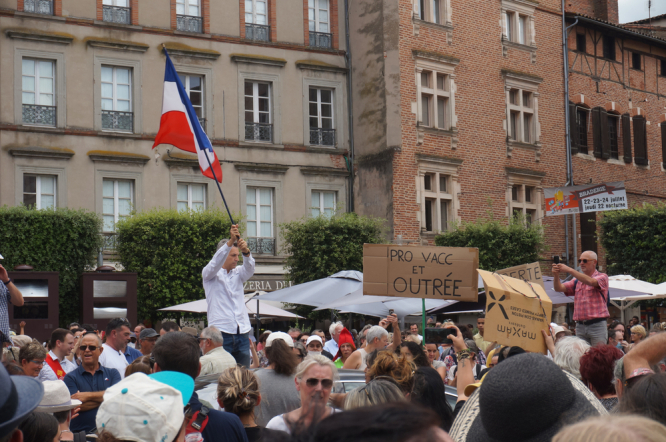 Protests followed those from last weekend and protesters appeared diverse in their views. One placard here, in Albi, reads: "Pro-vacc and outraged" Pic: S. Pech / Shutterstock

More than 160,000 people protested against the extension of the health pass rules in France this weekend, with a diverse range of protesters criticising the government’s anti-Covid-19 policies.

Official figures from the Interior Ministry show that there were 161,000 protesters nationwide yesterday (Saturday, July 24), a marked rise from the 114,000 counted last weekend.

Most of the protests were without incident, but some clashes erupted in Paris towards 18:00, with some protesters reportedly jumping barriers and throwing projectiles at police.

Protesters were pushed towards down the Champs Elysées towards the Arc de Triomphe, with roads reopening at around 18:40, once the situation was under control.

Interior Minister Gérald Darmanin said that nine people had been arrested in Paris during the clashes.

Writing on Twitter, he said: “Thank you to law enforcement for having monitored the protests today. I strongly condemn the violent behaviour aimed at some police, gendarmes, and journalists. In Paris, 9 individuals were arrested.”

It comes as the government plans to extend rules that will make it mandatory to show the health pass when entering public places with a capacity for more than 50 people, including restaurants, cafes, and large shopping centres.

It is already mandatory for places such as swimming pools, cinemas, museums, and places of worship.

A range of views

Protesters held a variety of slogans on placards and appeared to be a diverse crowd, with a number of different political viewpoints and reasons for marching.

Slogans included “Freedom”, “Don’t touch our children”, “We are not guinea pigs”, “Resign Macron”, “I am boycotting the dictatorship”, “No to mass surveillance”, and “Forced penetration is rape”.

There were members of the gilets jaunes protests, far-right sympathisers, and anti-vaxxers; as well as supporters of opposition party La France Insoumise, workers who fear they will lose their job if they do not have a vaccine; and young people worried about the policies, or those who are simply against the Macron government.

Some told Le Monde that they were not necessarily anti-vaccine, but pro-freedom or pro-democracy. Some simply said they were against the idea that a worker could be sacked if they do not have a vaccine.

One protester said: “They mistreat animals in an industrial way, and they’re now doing the same to us.” Her daughter, who has a Masters degree in ecology, said that they had “lost all confidence in politicians”.

Both said that they believe there to be more effective treatments against Covid-19, but that their use has been allegedly suppressed for economic reasons.

One railway worker said that he was marching for his children, because “I do not want them to grow up with less freedom”.

He said: “We do not have enough distance on the vaccines, and the government is incoherent. They might say something one day, and then the opposite a few days later.”

One protester, a bank worker, said that she was shocked by the vaccination policy, and by the “absence of a reaction from people in France”.

She said: “I am not anti-vaxx, my parents are vaccinated, that’s fine. But I don’t want to be injected. And so what, even though I pay my taxes, I will suddenly become a second-class citizen, and no longer be able to go into a museum or a cafe?”

Another protester said he was against Macron. He said: “He must go, he does not love France, he divides it. He is trying to pit vaccinated people against those who are not vaccinated.”

He called on people to boycott all establishments that will require the health pass from August, including cultural sites, sports halls, restaurants, and bars.

Some bar and restaurant owners also spoke at the protest in Paris. One, Katia Boucher, the owner of a restaurant called La Bohême, in Ligescourt (Somme), publicly said that she would not check health passes at the entrance of her space.

She said: “I will not put apartheid in place, I will not be complicit.”

One young woman, aged 21, who is studying at La Sorbonne and said her politics are “far-right”, said that she was ready to boycott cinemas and bars, and no longer go out, as a protest against the health pass.

She said that when she needs to take a long-distance train ride to see her family, she would be happy to take a test, but would not be getting vaccinated.

She said: “We will win. Millions of people are against this. After health waves, the fifth wave will be of the people.”

The latest protests were the second set of marches in as many weekends.

On July 17, an estimated 114,000 people marched across France – but figures also showed that the new rules have also boosted demand for vaccination by 40% in one week, with 1.5million people getting their first dose last week, and 4.5million jabs given in total in the same time.

After President Macron first announced the rule, bookings for vaccinations shot up immediately, with 17,000 vaccine appointments booked per minute after his address.

16% of people in France do not want Covid vaccine, new study finds
France’s health pass does not have a photo so must we show ID too?
Is there legal basis for France's obligatory health pass and vaccines?
Health pass infringes rights of children and poor says rights defender