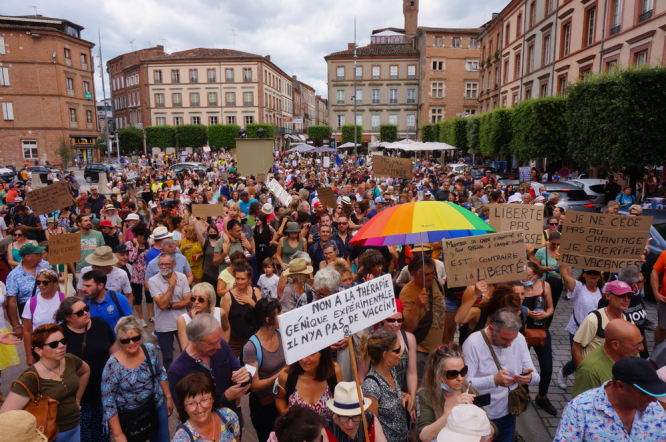 Sixteen percent of people who participated in a recent survey in France have declared that they have no intention of getting vaccinated against Covid-19.

The study, carried out on behalf of newspaper Les Echos between July 13 to 15, surveyed 1,002 people aged 18 and over from around France.

It found that working-class people were twice as likely to refuse the vaccination than people from higher socio-professional demographics.

Supporters of the extreme right-wing political party Rassemblement National are also twice as likely as supporters of other parties to be against Covid vaccine, with 29% of their supporters polled saying they do not intend to get vaccinated.

The study showed that more generally, 10% of people asked said they had not yet been vaccinated but intended to, while 8% had not yet made a decision.

Around two-thirds of adults in France, those aged over 18, have received at least one dose of a Covid vaccine.

France’s health minister Olivier Véran stated on Tuesday (July 20) that he hoped France could reach 80 to 85% vaccine coverage for everyone over 12 years old by the end of August.

Further demonstrations are planned today (July 24) all around France against the extended use of the health pass and plans to make Covid vaccinations mandatory for certain professionals.

Last weekend, over 100,000 protestors marched against the measures, and similar numbers are expected today.

The government wants the health pass - proof of vaccination against Covid-19, proof of a negative Covid-19 test taken within 48 hours, or proof of having had Covid within the past six months - to be a requirement to enter restaurants, cafes, bars, hospitals, shopping centres and access long-distance transport services.

The bill containing this measure, as well as the obligation for certain professionals, such as healthcare workers, to be vaccinated, was approved in France’s lower house of Parliament early Friday morning (July 23). It came after long discussions and the tabling of over 1,000 amendments by MPs.

The bill is being debated in the upper house today.

The government is aiming to have the measures in place by the beginning of August.

Protestors have described the health pass measures as an infringement on their liberties.

Health Minister Mr Véran has responded to this by saying that the government intends to scrap the health pass measures as soon as possible.

“The law does not allow its use any later than December 31,” he said, in an interview given to readers of newspaper Le Parisien.

He also responded to certain critics of the measure who have accused the government of turning France into a dictatorship.

Some protestors have sported yellow stars on their clothes to draw comparisons with Jewish citizens living under Nazi occupation during World War Two.

"If we were in a dictatorship, I wouldn't spend days and nights debating thousands of amendments," he said.

The study published by Les Echos states that several of the health pass measures the government is pursuing “appear to be encouraging the French to go and get vaccinated”.

It found that 25% of respondents said the requirement of the health pass to go to shopping centres is encouraging them to get vaccinated, while 17% said the same for restaurants and bars, and 13% for accessing long-distance transport services.

“However, a large proportion of non-vaccinated people appear to be totally resistant, with 52% saying that none of these reasons would encourage them to be vaccinated,” the study authors write.

Alexis Spire, a research director at France’s national research centre the Centre national de la recherche scientifique, said the problem is the measures do not affect a certain portion of the French population.

“A whole section of the population does not go to restaurants, the cinema or the theatre, or take the train or the plane," he told Les Echos.

“To reach the reluctant working class, the labourers and those in the suburban areas, it would be better to try to convince rather than to threaten them.”

France’s health pass does not have a photo so must we show ID too?