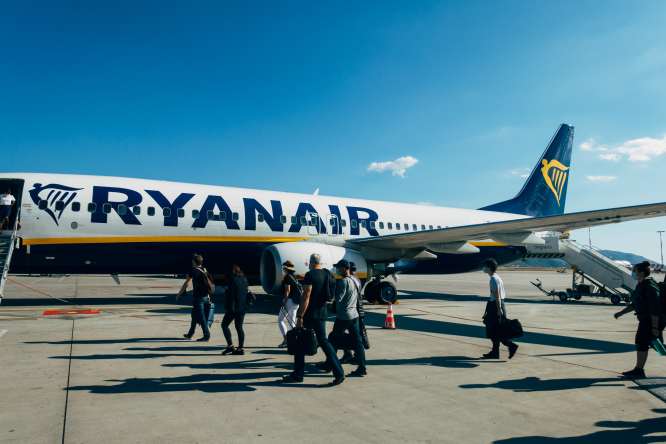 National airline Air France is trialling a digital health pass for passengers, in which essential travel information is stored in a QR code to be presented on a smartphone at the airport.

The QR code contains information required for travel, such as negative results from a PCR test taken within 72 hours before travel.

Digital documents confirming this information will be stored in the phone’s memory, but transformed into a scannable QR code for ease of use.

The trial, which began on March 11, will run for one month for flights from mainland France to Guadeloupe and Martinique.

In order to verify PCR test results, the airline has partnered with medical laboratory networks Biogroup et Cerballiance, both of which have centres throughout France.

When a PCR test is analysed in a partner laboratory, negative results will be transferred to the Air France app, which passengers can download.

The negative result will then show up when the passenger scans their QR code, which is also available via the app.

It is expected that the use of QR codes will help speed up travel.

Emmanuelle Ferracci, manager of Air France’s health pass project, said during the pandemic: “The time it takes to board planes has been twice as long as we’ve had to check obligatory paper documents prior to travel to certain destinations.”

It comes as budget airline Ryanair launched a Covid-19 Travel Wallet on its app on March 10.

On the app, passengers can upload health documents to be presented at the airport before travel, including negative PCR tests, Covid vaccination certificates, passenger locator forms and other documents that may be required.

Ryanair said in a statement that the wallet, while not obligatory, would help make air travel as “seamless as possible” for customers.

The airline, which operates throughout Europe, said it was launching the wallet as it was “confident” that the “successful rollout of Covid vaccines will see the return of EU holiday travel in summer 2021”.

While many EU countries still have travel restrictions in place, France yesterday eased Covid rules for travel to / from the UK and some countries outside Europe.

This comes as European leaders are discussing the introduction of a Europe-wide travel pass, which could facilitate international travel.

On March 17, the European Commission will present the idea of a digital “green passport” containing information about vaccination and Covid tests results, which would allow bearers to travel between countries.

President Emmanuel Macron has also suggested the health pass could be used to help reopen public spaces in France, as it could allow access to restaurants, gyms, museums and other cultural spaces.

Read more: France Covid health pass: What is it and how would it work?

But decisions are still being made about exactly what information would be contained on any future pass.

The President rejected the idea that the health pass should be based solely on vaccination as unfair, saying “we have not even opened vaccination to the youngest people [in France yet]”.

But Georges Daher, head of French airline industry body FNAM told The Connexion in December 2020 that organising a pass for international travel was “complicated”.

He said: “The most efficient [system] would be that measures are taken globally.

“There should not be some countries demanding antigen tests, some a PCR test, some a vaccination…

“[But] to get [all of the] the US, South American, China, other Asian countries, and European countries to agree, is not easy.”

Are Covid ‘green zones’ a way to open up travel in Europe?