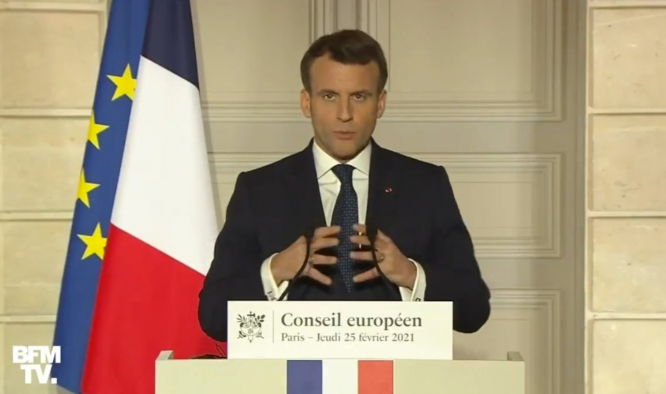 A Covid “health pass” could be introduced in France and the EU, to make it easier to track contacts and cases, President Emmanuel Macron has said, amid questions over personal data and individual freedom.

The president made the announcement yesterday during a press conference on the first day of an EU member video conference.

He said: “We will ask that people register to help with the alert system [and] contact cases. We will also doubtlessly be able to integrate recent negative tests [into the system]. We will also be able to see if you have been vaccinated.”

He called the proposed document a “health pass” rather than a “vaccine passport”, and said that it could be introduced ahead of the reopening of public places such as restaurants, theatres, and museums.

Mr Macron said: “I sense that there is often a lot of confusion on this subject. This [pass] will not be solely linked to vaccination [and will not be] a ‘vaccine passport’.

“If we open some areas, we will not make access to them conditional upon vaccination, because we have not even opened vaccination to the youngest people [yet].”

The president said that European leaders had discussed the introduction of a vaccination certificate, which could “make travel between member states more fluid” when border restrictions are lifted.

He said that Europe should “avoid each country developing its own system” and should “work to a common medical certificate”.

EU member states have asked the European Commission to set out prospective terms for the introduction of a possible EU vaccination certificate.

Yet, there is currently no consensus on this idea, or the rights that such a certificate might confer.

Some states have already suggested that they may “break ranks” from the EU and introduce their own certificates. Proponents have said that this would be similar to some African countries that require proof of vaccination for yellow fever before allowing entry.

Greece, which is highly dependent on tourism, has already submitted a proposal for a European vaccination certificate to the European Commission, which it says could be in place by the summer holiday season this year.

Yet, France has so far appeared reticent about the idea and said it is too early to introduce a vaccination certificate when comparatively few people have so far had access to vaccination.

President Macron has said he is not in favour of having different rules for different member states.

He said: “If things go well, none of us will accept that to attract, say, tourists, there would be one country that is less discerning than others, and that would take risks by allowing people to come from the other side of the world to fill up its hotels.”

Some airlines have already said they would be in favour of some kind of vaccination passport idea. The International Air Transport Association (IATA) - which has 290 airline members - has said that it is currently developing its own international digital health certificate platform.

But critics - especially representatives from the far-right party Le Rassemblement National - have said that introducing vaccination passes, especially if access to public spaces was conditional on their use, would negatively and unacceptably curtail people’s freedom.

The party has said that the plans would effectively make vaccination mandatory in France.

Florian Philippot, president of the Patriotes party, has already denounced the idea of a vaccination “passport” as “clearly dictatorial and totalitarian”.

But President Macron has repeatedly emphasised that a “health pass” would not be the same as a “vaccine passport”.

Covid France: Will I get proof of my vaccination?