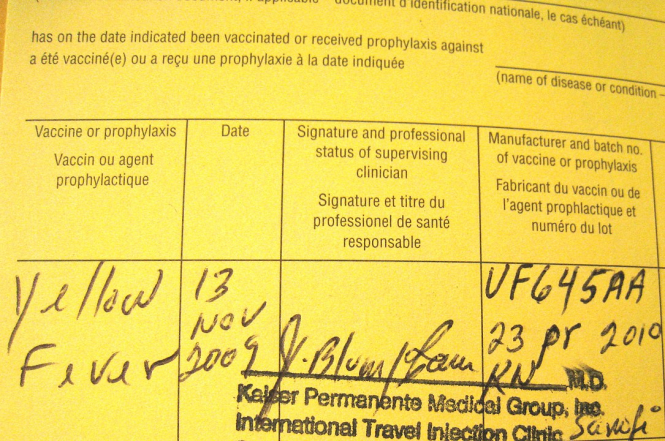 The controversial proposals could see the introduction of a "vaccination passport" or certificate, similar to that required for yellow fever, shown here
By Hannah Thompson

France is debating whether to introduce a “health passport” system as part of a legal framework to manage health crises, but the idea that it could require mandatory vaccination is controversial. We explain.

France is set to begin vaccinations against Covid-19 on December 27, but the government has not made vaccination compulsory.

Yet the new proposal could - if passed - give the Prime Minister the authority to require vaccination for certain activities during a health crisis, such as flying or travelling across borders.

The proposal was presented to ministers on December 21. It proposes the idea that people’s movements, activities, and use of public transport could become conditional upon vaccination or proof of a negative test.

The new rules could come into force from April 1, 2021, to replace the current laws put in place in March 2020 to manage the current health crisis.

Gabriel Attal, government spokesperson, told ministers: “The objective of this bill is to prepare us for the end of the state of health emergency, and to establish a lasting legal framework to deal with health crises.

“It is therefore about building a coherent and robust framework using both tools that were available before the crisis, and those that have since been put in place.”

What is the most controversial part of the bill?

In its first article, the project aims to change article L.3131-9, n°6 of the public health code, giving the Prime Minister the power to “make the movement of persons, their access to means of transport or to certain places, as well as the carrying out of certain activities, subject to the presentation of the results of a screening test establishing that the person is not affected or contaminated, and/or having preventive treatment, including the administration of a vaccine, or a cure”.

For example, this could mean that only people who have had the required vaccine could use public transport or get on a plane.

Similar rules have already been in place during the Covid-19 pandemic, with some airlines and countries already requiring passengers to show proof of a negative test before allowing them to fly or enter.

This bill would make the requirement law in France.

Since 2005, more than 200 countries - including France - have signed an international health agreement with the World Health Organisation (WHO) to recognise an international certificate of proof of vaccination against this.

The certificate - official name International Certificate of Vaccination or Prophylaxis (ICVP).- is a “yellow booklet”, and it is required for entry to several African countries, whether at the time of requesting a visa, or upon entry into the country.

Currently, yellow fever and poliomyelitis are the only vaccinations that can be recorded in the booklet, but it already includes the statement: “This same certificate will also be used in the event that the regulations are amended or in the event that a recommendation is made under these regulations by the WHO to indicate another disease”.

This would theoretically allow the WHO to extend the “certificate” requirement for Covid-19.

Will this mean there will be “health passports”?

Yes, it could do.

Airlines in particular have already said they are in favour of such a move. At its 76th Annual General Meeting, the International Air Transport Association (IATA) - which represents 300 companies worldwide - proposed the idea of a health or vaccination passport to enable people to travel.

On November 23, it suggested the “IATA travel pass”, which it said would “restore a climate of confidence” around airline travel, and help to compensate an industry that has lost billions of dollars due to Covid-19.

The Australian airline Qantas has already said that it will require passengers to show proof of a Covid-19 vaccination before allowing them to fly internationally.

Similarly, this week the head of French airport group Groupe ADP, Augustin de Romanet, said that restrictions on flying already exist, with many countries in Africa also requiring proof of vaccinations for other conditions, and proof of malaria precautions before entering.

He said: “I do not know if a vaccine will be made obligatory, but the principle doesn’t seem so mind-blowing to me.

“Currently to travel to Tanzania, for example, you are required to have precautions in place against malaria. So the idea itself that your trip is conditional upon a vaccine, is not such a strange idea for our society, and that was in place well before Covid.”

Why is the bill controversial?

Critics - especially representatives from the far-right party Le Rassemblement National (RN) - have said that the idea would negatively and unacceptably curtail people’s freedom, and would effectively make vaccination mandatory in France.

This alone could be controversial in France, as the country has already been shown to be increasingly reticent towards getting the Covid-19 vaccination, and one of the most sceptical countries towards the jab.

Read more: Covid: Can the French be convinced to get vaccinated?

Florian Philippot, president of the Patriotes party, has already denounced the “passport” idea as a “clearly dictatorial and totalitarian” idea by Prime Minister Jean Castex.

Sébastien Chenu, spokesperson for the RN, told France 2: “We have discovered a legal bill in which there are a few lines that say that if you are not vaccinated, your freedoms will be curtailed.

“All this is very dangerous, it is legally completely ridiculous, because, obviously, it will mean that vaccination will [effectively] be obligatory in this case.”

President of the RN, Marine Le Pen, said on Twitter: “We will never accept that the government would impose by coercion that which it is not able to make us accept through trust.

“There cannot be second-class citizenship for non-vaccinated people. This is profoundly damaging and [amounts to] liberticide [death to freedom].”

Guillaume Peltier, of opposition party les Républicains, also tweeted: “What is Emmanuel Macron hiding? I thought, naively, that in our country, respect for liberty was the rule, and that restrictions were the exception.

“But here, the executive would have all the power to suspend our freedoms without checks by Parliament? Inconceivable.”

Detractors are also against the suggestion of a “green passport” in France, which was proposed by MP Valérie Six, and which would make it necessary to show proof of vaccination for entry into public spaces, such as restaurants and cultural sites such as museums.

What has the government said on the issue so far?

Nothing has been decided yet.

Health Minister Olivier Véran has said that the bill will not appear before Parliament for “several months”, as “trust” around the Covid-19 vaccines will first need to be built up.

He said that as vaccinations had not yet even started in France, “now is not the moment [for this bill]”.

He said: “This bill will be voted on in April and presented as a ‘toolbox’, that we may use later if needs be. It has nothing to do with the current vaccination campaign that is starting on Sunday [December 27].”

Mr Véran suggested that the government has no intention of making vaccination mandatory.

He said: “This bill could concern this pandemic, but also any future major health event that might affect our country. This bill is envisaging all possible cases.”

It said: “The text [would simply] impose provisions that already exist. [A similar system] already exists for yellow fever if you want to go to French Guiana for example.”

Mr Véran also added that the bill could be subject to modifications and alterations before being passed, and that it needed to “make its way, [and] to mature" before it would be voted on either way.

Covid vaccinations in France to begin on Sunday