Are there any clues to identify private speed camera cars in France? 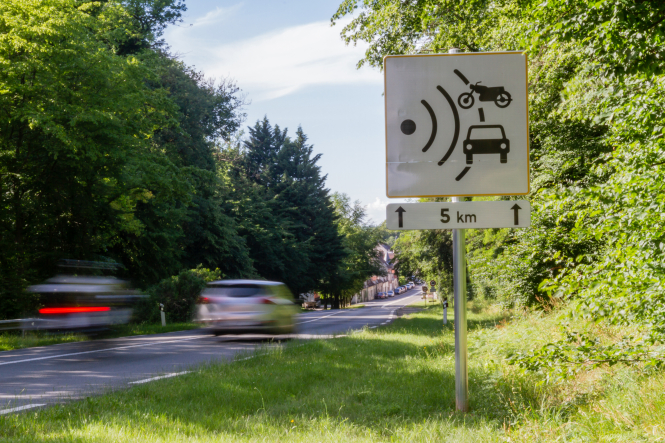 The speed camera cars easily blend in with normal traffic, but there are some subtle ways to spot them Pic: sdecoret / Shutterstock

Private speed camera cars – voitures radars privées or radars mobiles nouvelle génération in French – are now in operation across much of the country and are, of course, meant to be difficult to spot.

Driven by outsourced operators, the cameras are normally fitted inside cars such as Peugeot 308s, Dacia Sanderos, Ford Focuses and Citroën Berlingos so that they blend in with normal traffic.

They use an invisible infrared flash to capture the number plates of speeding drivers so it is difficult for motorists to notice when they have been caught.

However, one feature which may allow you to distinguish the cars is the black rectangle outlined in grey which is fixed to the back windscreen.

This is visible when up close during the day, and may reflect headlights at night, making the vehicles easier to spot but, if you are speeding, it is probably too late.

If you are coming towards the car head on, you may see an assortment of cameras in its windscreen. Two smaller devices on either side of the front seats confirm the maximum speed limit for the area while a bigger camera placed in the middle of the dashboard captures the details of speeding vehicles.

Again, if a car is already speeding, it may be caught before the driver notices the presence of a camera.

The car’s number plate will be the same as regular vehicles and so will not offer any indication of its purpose.

How likely am I to come across a private speed camera car?

Speed camera cars have been employed by the French police since 2013 but private drivers have only been permitted to use them since 2018.

The drivers can work for up to six hours a day while the authorities are limited to one hour and 45 minutes. The presence of private operators could potentially free up police officers for other duties.

The route that independent drivers follow is determined in advance by the local police force, and authorised by the prefecture. There are no bonuses given related to the number of fines issued either to the private firm or the driver internally.

There are set to be 450 speed detection cars – 223 of which will be operated by private operators – in the country by the end of 2021.

Next year, the cars will begin covering roads in Ile-de-France, Auvergne-Rhône-Alpes, Provence-Alpes-Côte d'Azur and Occitanie, meaning that they will be present in all 12 regions of mainland France (and not Corsica).

To give an idea of their efficiency - between August 16 and August 28, these cars captured images of 793 speeding vehicles in Deux-Sèvres.

The department’s prefecture said that the devices were issuing 322 fines on average each month.

However, in the departments where the cars are yet to arrive, fines will not begin to be handed out until 2023.

Although these private cars are more difficult to spot than regular speed cameras, they are more lenient on drivers.

Normal speed cameras only allow a car to travel at 5km/h above the speed limit, or 5% in areas where the limit is over 100km/h.