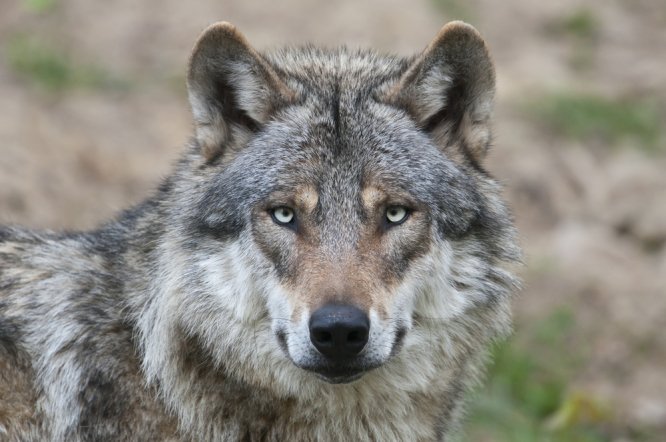 The wolf body was strung up in front of the Mairie, and had been killed only recently Pic: Bildagentur Zoonar GmbH / Shutterstock

A French minister has denounced the hanging of a dead wolf in front of a Mairie in the Hautes-Alpes as an “unacceptable” act. The perpetrators risk up to three years in jail and a €150,000 fine.

The wolf corpse was strung up along with a banner reading “Wake up, it’s already too late”.

The corpse was discovered in the early hours of Friday, September 24, by a cleaning lady, at the Mairie of Saint-Bonnet-en-Champsaur. It was covered in blood, and was found hanging on a rope in the square in front of the town hall, reports France 3.

According to the public prosecutor in Gap, Florent Crouhy, "the animal was killed recently because the body was still bloody".

An investigation into the killing has been opened, and an autopsy is set to be carried out to determine the bullet that killed the animal.

The prosecutor added: "This poaching of a protected species but also the staging of it like this is a first.”

Wolves are a growing presence in the department, and their introduction is controversial among farmers with livestock. Wolves are a protected species.

It is thought that the dead wolf was left in protest at the animals’ presence in the area.

She wrote on Twitter: "No act of intimidation will lead to lasting solutions when it comes to the [peaceful] coexistence of humans and wolves. The vast majority of people involved are working towards this."

Wolves are a controversial subject in Hautes-Alpes.

Representatives of major agricultural unions in the department have stopped short of condemning the wolf hanging.

A statement reported by France Télévisions said: "Hautes-Alpes farmers are being pushed to the limit. This [killing] is the result of the failure of the public authorities and of the State, to take into account the working conditions and problems that breeders have to face.”

In a statement, large predator defence association Ferus described the killing as "an inevitable outcome of the impunity granted to the violence perpetrated for so many years by anti-wolf and anti-bear groups.

“The public authorities are as responsible as those who killed and hanged this wolf.”

In the department, illegal attacks on wolves have been reported, but they remain "fortunately rare", the prosecutor said.

Wolves are a protected species, but farmers that are threatened by its presence do have some regulations that allow them to deter the animals.

A ‘scare shot’, which does not aim to kill the wolf but to frighten it away, can be carried out without prefectural authorisation if you have a hunting licence.

A ‘defence shot’, simple or reinforced in the event of an attack, must however be requested from the prefecture within a very specific framework and by authorised shooters.

The right to a defence shot was refused to breeders in the department a few months ago, France 3 reported.

In August, farmers had already alerted the prefect of the Hautes-Alpes, to what they say is a growing problem.

Simon Segretain, a local sheep and alpaca farmer, told Le Dauphiné: "You don't become a farmer to see things like this. The year I joined my parents, we suffered a fairly large attack: 10% of the herd was taken, about forty ewes.

“Imagine, you wake up one morning and find your animals dying. We have to find solutions to protect our animals, it's unbearable for us farmers to live in fear.”

It comes after the president of the Hautes-Alpes departmental council, Jean-Marie Bernard, was in March ordered to pay €10,000 by the Gap criminal court, of which €5,000 was suspended, for "possession, transport, offering or transferring a protected species".

Mr Bernard had given a wolf's tail as a gift to a state representative in 2020. He had claimed the act as a “political move” in defence of farmers. He has appealed the fine.

Wolves have been present in France since 1992, and the animal has since spread in mountain areas.

Since the animal’s arrival in the Mercantour park (Alpes-Maritimes), it has crossed the Rhône valley to the Massif Central, before spreading to the Vosges and the Jura, towards the Alps, but also towards the Pyrenees, according to the Ferus association.

Lone wolves have even occasionally been reported in the Hauts de France and Grand Aquitaine areas.

There are now an estimated 624 wolves in France, an increase of 8% per year, and most are found in the southeast.

Wolf identified in southeast Vienne is first in a century
Caught on camera: Wolves in the snow in French mountains
Wolves rehomed after storm destroys French wildlife park