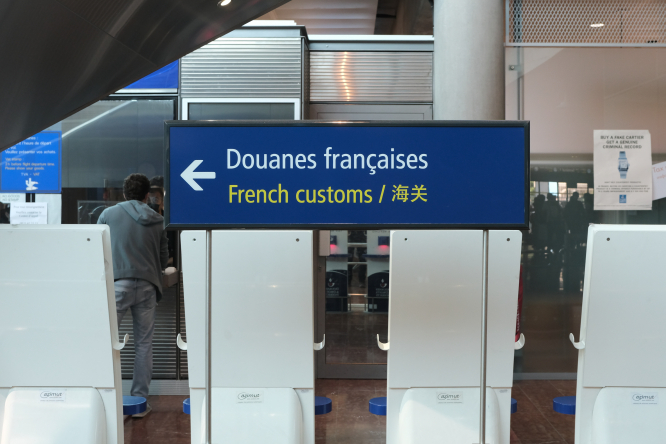 I am confused as to what I am allowed to bring into France from the UK now post Brexit; can you please clarify the rules? Post-Brexit there are many changes relating to what you may bring into France and these vary depending on what the item is and the reason for the trip.

Here is a recap of key points to know about bringing items into France. Note also that the UK also has similar rules now relating to travel in the other direction.

There are certain food items that you cannot bring across the border from the UK to France, whatever the reason for the trip, due to EU animal and plant health rules.

Essentially, these relate to meat and dairy products, including processed items made from meat such as pork pies or Bovril.

‘Dairy products’ include cheese, yoghurt, butter, ice-cream etc. However up to 20kg of fish is allowed and for some other animal-derived products, such as honey, up to 2kg is allowed.

You also cannot bring in plants or fresh parts of plants, such as seeds, fruits and vegetables, with a few exceptions like coconut, banana, pineapple and dates.

You cannot bring in fuel wood and logs.

Read more: Brexit: What you can (and cannot) bring into France from UK

There are specific limits on how much alcohol and tobacco can be brought in, by quantity. Above these, you need to make a declaration and there will be VAT, excise duties and customs duties payable on the amounts above.

You cannot bring in more than 16 litres of beer, four of wine, one litre of alcohol at more than 22% alcohol or two litres of other strong alcohol lower than 22%.

Cash, traveller’s cheques, or prepaid credit cards to a combined value of more than €10,000 have to be declared. This can be done online no more than 30 days before the date of travel or at customs on arrival in France by submitting a specific form.

It is unclear from official French websites as to whether having declared online you can then go through a ‘nothing to declare’ channel on arrival; we are checking with the Douanes services.

In theory, any items you bring with you into France are potentially subject to French VAT (20% for most items) and in some cases customs duties (levied at a percentage rate, variable depending on the product from 0-22%) where the item is not proven to have been made wholly or mainly in the UK or EU. However many items, such as furniture, have a 0% rate of import duty.

The impact of this depends on the reason for the trip.

Your ordinary travel essentials, clothes and toiletries etc, are unlikely to pose an issue, and if this is all you are bringing with you to France you will most likely take the ‘nothing to declare’ lanes and no questions will be asked.

According to the rules, however, any costly items you bought in the UK as souvenirs or gifts etc should notably be declared if they are cumulatively above certain franchises voyageur (personal allowances).

The taxes are payable in full on any items taking you above the franchises levels.

More detail and examples regarding these levies can be found in this article.

Bringing items to a second home

As above, personal essentials in your baggage are unlikely to pose an issue, but anything conspicuous that you are bringing to furnish the second home, or items of DIY equipment and materials etc, should in theory be declared.

VAT, and potentially duties, may be payable on these, though reader reports are variable as to how strictly this is applied, with many reporting being waved through, for example on arrival by car via Eurotunnel in France.

One reader said their car was ‘jam-packed’ with kitchen parts, a canoe and furnishings, but border officials “weren’t interested”, another said they reported to customs but officials were similarly not interested in their new glass table that was being carried on the roof.

To be scrupulous, however, officials of the Douanes service told The Connexion that you should bring an inventory of what you are transporting and present it to customs at the border.

If you are moving to France, then you are exempt from VAT and customs duties, in theory limited to items owned by you in the UK for at least six months. Ideally you should have evidence of the latter but a French customs official said it is usually enough to attest to it.

This VAT and duty exemption relates to personal belongings, but not, for example, to tobacco and alcohol, work vehicles, mobile homes or certain professional materials.

To qualify, you have to transfer all the inventoried belongings in the 12 months after you become resident in France, either in one go or in several trips.

On the first trip, you must supply on a piece of paper an inventory to the Douanes (customs) service listing the total items to be brought, with estimated values, in duplicate.

The Douanes service said, for example, if bringing bathroom products, you do not need to list each toothbrush, but give an estimated value for “hygiene products”.

If bringing a car or motorbike with you, it should be on the inventory.

You should also fill in form Cerfa 10070*03 and bring any relevant documents proving that you have been living in the UK and that you are now moving to France.

Note that the UK has similar rules, relating to transfer of main residence or temporary visits, when transporting goods from France to the UK.

Whether bringing items to a main or second home, one option is to use a specialist international removals firm instead of bringing the items yourself, in which case the firm will take charge of the declarations required.

It is likely to have to use the services of a French agent to help with the customs paperwork on the French side.