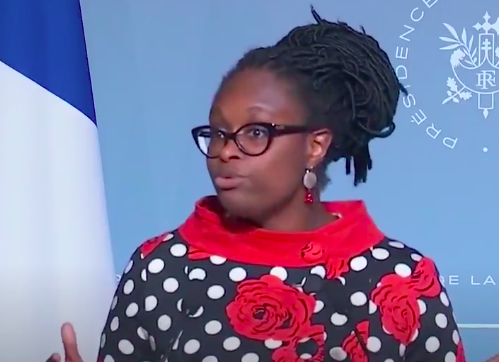 Ms Ndiaye suggested the change in a column published in Le Monde newspaper. In the column, she writes about her own experience of racism in France (Ms Ndiaye moved to the country from Senegal, when she was 16).

She asks: “Why not open, in a calm and constructive way, the debate on ethnicity statistics?”

She argues that French laws are founded on what she called "republican universalism" - the idea that everyone is "the same" - without acknowledging the realities of real life.

She writes: “We should not hesitate to name things, to say that a skin colour is not neutral; that a surname or a name can have stigma attached."

The law in France is under discussion following anti-racism protests in France in recent weeks, which have drawn thousands of marchers. These have mirrored the recent Black Lives Matter protests in the US and worldwide against police brutality and racism.

In this context, Ms Ndiaye agreed that “racism in France is not resolved”. She suggested that using data could help “fight back against a tireless battle that is economic and social, democratic and republican”.

However, many of Ms Ndiaye’s colleagues in government have opposed the idea, including minister for the economy, Bruno Le Maire. He said: “I remain against the ethnicity statistics, which don’t correspond with the idea of French universalism, and the fact that a French person is a French person. I don’t see their race, origin or religion; and I don’t want to.”

President Emmanuel Macron has also said that the subject is not up for debate “at this stage”.

The collection of ethnicity data was banned in France in 1978, under the law of information and freedom. The law bans the collection of personal data based on race, ethnicity, political, religious or philosophical opinion, trade union associations, health or sex life. Failure to comply with the law is punishable by a €300,000 fine and five years in prison.

The law was debated in 2007, by France’s Conseil Constitutionnel, which ensures that the country’s constitution is upheld. Some members of the council proposed that ethnicity data could be collected and used uniquely to allow “studies measuring the diversity of people's origins, discrimination and integration”. But the council ultimately decided that the collection of data went against the constitutional principle that “assures legal equality for all citizens, regardless of their origins, race or religion”.

Loopholes in the French law

There are however, loopholes in this law. For example, data can legally be collected if done so with consent, and if statistics drawn from data will be used to protect someone or are in the public interest.

During discussions in 2007, the Conseil Constitutionnel also said that it would not be unconstitutional for statistics to be drawn from data such as names, origins and nationalities of those in France to contribute to “studies measuring diversity or origins, discrimination and integration”.

For many, resistance against collecting ethnicity data goes back to the surveillance of Jews in France during the second world war.

During the war, a census was imposed to identify Jews in France, and this information was then used to gradually restrict their rights, ultimately leading to many French Jews being deported to Nazi death camps.

However, in modern politics, the debate is often framed as a party political argument. Prominent politicians for France’s right-leaning party Les Républicains including former president Nicholas Sarkozy, and former prime minister François Fillon, have supported allowing the collection of ethnicity data in France. Meanwhile, leaders of the left-leaning Parti Socialiste such as former president François Holland and former prime minister Manuel Vals, declared themselves against the idea.

The far-right Front National has been both for and against the collection of ethnicity data in France. Leader Marine Le Pen has argued such data could lead to positive discrimination, which she is against. However, in 2015, an inquiry was launched into a Front National mayor Robert Ménard, who suggested making a record of the number of Muslim students in his town, Béziers (Hérault, Occitanie).

The collection of ethnicity data is legal in most European countries, although in Germany, Switzerland, Holland and Greece there are some restrictions. In England and Wales, it was allowed by law in 1991, with 15 possible responses on questionnaires.

The collection of ethnic data is also legal in Canada and the US. Recently this data has been used in health studies that have found black people in the US have a higher risk of catching Covid-19.