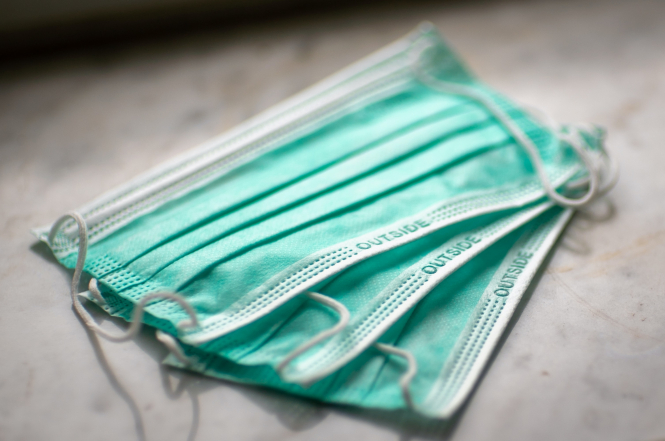 The masks do not degrade naturally and are designed to be destroyed at very high temperatures with other medical waste in hospital incinerators. Tens of thousands of the green or blue masks are now used – and thrown away – every day in France. Ecologists fear that those thrown out of car windows will pollute the land and oceans for centuries to come.

Now a trial in Vienne using a system of recycling polyester and other plastic fibres, including the polypropylene used in the masks, into plastic blocks which can then be used to make new objects has proved successful. The start-up Plaxtil, named after the term it gave to the new plastic blocks, uses a process developed in 2017. It says it has been overwhelmed with interest in its recycling work.

Company co-founder Jean-Marc Neveu said: “The strength is not the same as plastic direct from the oil refinery but is strong enough for almost all uses.” The process involves sorting textiles as much as possible into their different types, shredding them, and then heating the shreds to very precise temperatures, which differ according to the type of plastic. This melts the fibres, which can then be poured out of the oven for further treatment before cooling.

François Filippi, managing director of operations for Calitom, a local authority-owned company which collects household rubbish in rural communes in Charente, said masks were becoming a serious problem. “People should ideally put used masks in a bag, and then in the black rubbish bags,” he said. “That way, they get sent to the incinerator or to centres of storage without being manipulated by humans. Unfortunately, some people put them in the yellow recycling bags which have to be opened and handled by our staff, exposing them to unnecessary risk. There are, unfortunately, more and more people who just throw masks away anywhere.”

Reader question: Should I wash my fabric face mask at 60 degrees?

Plaxtil has received backing from the Nouvelle Aquitaine region, Grand Châtellerault area, and two state agencies. It says its system can be financed best in a “circular economy” where recycled plastic is returned to the companies which uses the plastic to make objects. For the trial, collection bins for surgical masks only were installed in the town. Collected masks were “quarantined” for four days before being put through the shredder in the same way as other textiles at the factory.

After shredding, the mask fibre was passed through an ultra-violet light tunnel to ensure disinfection before being turned into Plaxtil blocks. Another company – Cosmolys, based near Lille, which specialises in handling hazardous medical waste – received approval last year for a three-year project to see if throwaway surgical instruments made out of polypropylene can be recycled into a useful plastic. Early results are promising, the firm says. The same procedures are likely to work on the polypropylene fibres used for masks, it told Le Figaro.

Single-use surgical masks remain more efficient than cloth masks even after being washed five times, claims Prof Philippe Vroman, of the Ecole nationale supérieure des Arts et industries textiles at Roubaix. Washed masks still filter out 95% of particles measuring three microns, he found after research. Official advice remains that masks must be thrown away after one use.