France plans hundreds of extra Covid testing centres - but why? 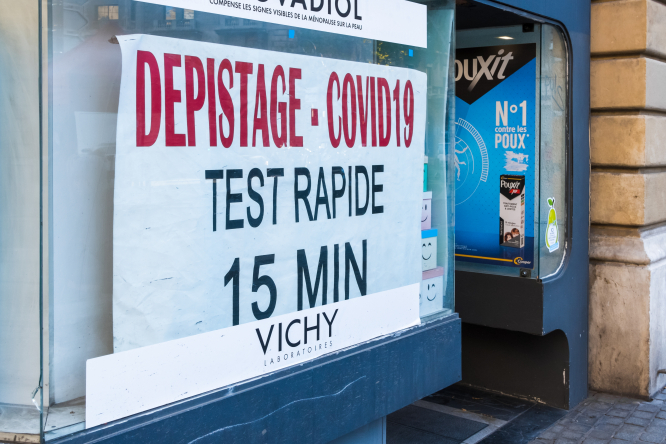 The government is also aiming to get more pharmacies involved in offering Covid tests. Currently around 60% of them do so Pic: Obatala-photography / Shutterstock

France is intending to increase its Covid testing capacities in view of combatting the wave of Omicron that is causing record-high case numbers. In the past week, the country has averaged 265,837 reported cases per day.

Government spokesman Gabriel Attal said in an interview yesterday (January 9) that a new plan to reinforce testing policy was under development.

“It’s a big financial outlay, but if we don’t test, if we let the pandemic run even more rampant, if we have to close down [businesses] and compensate people, I’m not sure it would cost less money,” he said in an interview with BFMTV.

“Testing is an essential tool for controlling the pandemic, and we accept that,” he added.

“We are testing too much and not enough at the same time”, Dr Kierzek, a medical expert for TF1, told La Dépêche in an interview published Friday (January 7).

“Too much in the sense that it is costing a huge amount of money which could be spent more wisely. Too much because tests are carried out on people who are not ill – and we should not confuse positive people with ill people – which is completely useless from a medical perspective.

“And finally we are testing too much because this new epidemic is generating few sick people and is sending very few people to hospital. In this context, it becomes less strategically useful to test on such a massive scale.

"We therefore find ourselves in a horrible vicious circle which does not correspond at all with the reality of Omicron,” he said.

France carried out a record high 9.5 million Covid tests between December 31 and January 6. This high number is likely linked to more people testing for Christmas and New Year gatherings.

When contacted by BFMTV, the Health Ministry stated that this shows that the country is capable of handling such high demand, and therefore should increase testing capacities.

It said that the aim behind Mr Attal’s announcement is twofold: Improve the testing process, and help relieve staff working at pharmacies and testing centres.

The government also wants to increase the number of pharmacies that offer rapid antigen tests.

Currently, around 60% of pharmacies offer these tests.

“We will guarantee the 6,000 pharmacies that do not carry out antigen tests and self-tests that we will compensate them for any stock that they buy and do not sell, Mr Attal said.

The government is also set to allow university students doing their masters in biology to help take test samples, so as to help alleviate the pressure on staff working at laboratories. No figures on how many students this would involve has been communicated by the government.

Philippe Froguel, a professor of medicine at the University Hospital of Lille and at Imperial College London, said he did not believe the government was capable of increasing testing capacities in France.

“A lot of pharmacies don't have the space or the staff to do this. We won't go from 60% to 90%, and there aren't enough people in the testing laboratories,” he told BFMTV.

He also added that the plan to use university students was “an anecdote”.

He said the most effective solution would be to offer self-testing kits on a massive scale.

“I can see that what works is self-tests,” he said.

“Unlike France, the UK trusts its population to report the results and self-isolate [if necessary].

“They allowed supermarkets [in France] to sell them but they took away any legitimacy [from the self-tests] because you have to queue up anyway to do another test to confirm the results,” he said.

Israel to reserve PCR tests for most vulnerable

Israel recently introduced a measure that reserves PCR tests - the most accurate tests for detecting Covid - for the most vulnerable people.

Professor Arnaud Fontanet, epidemiologist at the Pasteur Institute and member of the Scientific Council, believes there is a “certain rationality” behind this idea.

He told BFMTV that as PCR tests are the most accurate and reliable, using them for people at risk of serious forms of Covid makes sense as that way they can be sure they have Covid and seek treatment as early as possible.

For people less at risk, he said there is a real interest in using self-testing kits. He admitted that there remains doubts about their precision, but that they can be useful if people take them just before they plan to meet with groups of people or go to events.

France is already in roughly the top ten countries in the world that tests the most for Covid per population, according to data from OurWorldinData.

However, several of its European neighbours still test more, such as Cyprus, Austria, Slovakia, Latvia, Greece, Denmark and the UK. Outside of Europe, Israel and Singapore are also major testers.

Five Covid test and vaccine updates for France this week