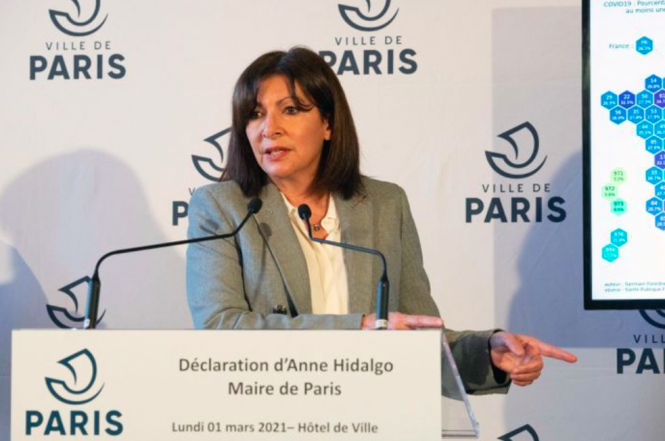 Mayor of Paris Anne Hidalgo said yesterday she was opposed to the idea of a weekend confinement in the French capital.

Weekend lockdowns have been imposed in other areas where Covid cases are rising – such as Dunkirk and Nice – and the deputy mayor of Paris suggested last week that a strict 3-week confinement should be enforced in the capital.

But Mayor Ms Hidalgo said the idea of a weekend confinement in Paris and the surrounding suburbs was a “proposition I find difficult, severe and even inhumane”.

The mayor was speaking at a press conference following a meeting with local mayors, the prefecture de police and local health body l’Agence régionale de santé.

The mayor said that local authorities were not working on the theory of a strict three-week confinement, which was suggested last week.

Instead, she said, people in Paris “needed a horizon” to work towards.

She suggested other alternatives to confinement, such as encouraging teachers to open windows in classrooms during lessons, teach lessons outside if possible, and keeping parks, gardens and public spaces open for public use.

She said: “The more we restrict public spaces, and the time that families have to spend outside, the less we fight against Covid.

“That’s what we learned from the first confinement – outside we have less risk of catching Covid as long as we wear masks and respect barrier measures.”

She said that city authorities would organise a system for allowing school classes to take place in squares and gardens.

She also suggested that in addition to libraries, which are already open, more spaces for university students to work in could be opened as “[students’] health, including their mental health continues to deteriorate”.

These could include spaces in museums, theatres, municipal centres and sports halls.

Ms Hidalgo also called for increased testing and vaccination in the capital.

She said mass saliva testing should be used every 15 days in schools where Covid cases had been identified.

And she said that vaccination efforts in the capital should be “multiplied by four”.

She said: “By the end of March, going at our current pace, only a quarter of Parisians over 75 will have received two doses of the vaccine.”

“I have asked for the AstraZeneca vaccine be used as a priority in highly populated areas and for adults who work in crèches, schools and for police.”

While the mayor has voiced her opposition to the weekend lockdown, and suggested alternatives, the mayoral office does not have the authority to make a final decision on which health measures will be taken.

The prefecture and local health authorities, which will make the decision, are still considering whether a weekend lockdown beginning on March 6 would be the best solution, as Covid cases in the Ile-de-France continue to rise.

The latest figures from the AntiCovid app from February 1 show that there are 824 patients currently in intensive care in the region, meaning 71.8% of intensive care beds are occupied by Covid cases.

In the 24 hours prior to figures being released, 79 new patients were admitted to intensive care.

Professor Djillali Annane, head of intensive care at the Raymond-Poincaré hospital in the western suburbs of Paris, told news source BFMTV: “We are seeing a strong rise in admissions into intensive care and we don’t see any sign of that reducing.

“On the contrary, all the indicators make us think that admissions will accelerate, so if there is a confinement announced in Ile-de-France that would be good news.”

Announcements about the measures to be taken in Paris – and other departments at risk of extra Covid rules – are expected tomorrow.