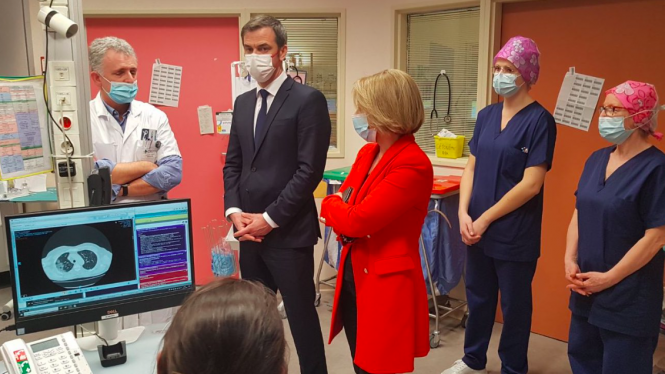 Health minister Olivier Véran visited hospitals in the area, which are full and will now begin transferring patients
By Joanna York

A local confinement will be enforced in Dunkirk this weekend and next weekend, as Covid-19 cases in the Nord department rise.

Health minister Olivier Véran said yesterday that cases in the area were rising at an “alarming” rate, as one in 100 people (out of 250,000 inhabitants) are testing positive for Covid each week.

Dunkirk has been heavily impacted by the more contagious UK Covid variant. Earlier this month, instances of the UK variant in the area had reached 70% among positive tests checked for variants.

Under the confinement rules, leaving the house will only be permitted under certain conditions. All shops will close, except those selling food; and 10 shopping centres over 5,000m2 will only be available as click-and-collect services.

Buying alcohol to take away and consuming alcohol in the street has been banned in the entire Hauts-de-France region.

Mayor of Dunkirk Patrice Vergriete called an emergency meeting with senior politicians earlier this week, as the local incidence rate rose over 900 cases per 100,000 inhabitants.

Mr Véran said that this rate is “double that of when it was at its highest during the first and second waves”. The national incidence rate is significantly lower, at 105 cases per 100,000 cases.

Local hospitals must now “transfer patients to other hospitals in the region, and from tomorrow, probably elsewhere in France”, the health minister added.

Around 16,700 extra doses of Covid vaccines have been redirected to Dunkirk.

Fears cases will spread through department

President of the Nord department Jean-René Lecerf told news source FranceInfo that his “fear now is that the perimeter [of local infections] will grow quickly”.

Speaking yesterday, he said that the city of Lille “risks being affected very soon. On the other side of the department border there is Pas-de-Calais, which is not doing well. I worry as well for Boulogne, Le Touquet and Calais in the short term”.

While welcoming the new confinement rules in Dunkirk, he worried they would not be respected on beaches and the A25 motorway by “tourists in search of fresh air”.

Dunkirk is not the only area in France to go into local lockdown.

Nice and the Alpes-Maritimes coast will go into confinement this weekend and next weekend, the department’s prefect announced this week.

In Moselle, Grand Est, where high numbers of the South African and Brazilian variants have been identified, the prefect has not announced a lockdown.

Instead, the department will increase the number tests being done and police checks to ensure health measures are being respected.

The government did not agree to calls from local officials to close schools in the area.

Read more: Which communes around Nice are affected by weekend lockdown?

It comes as the health minister has said the next few days will be “crucial” for around ten departments experiencing high numbers of cases.

Map showing the rate of incidence (the number of weekly cases per 100,000 inhabitants)  in departments in France (@guillaumerozier / covidtracker.fr / Twitter )

He said: “The epidemic has stopped receding in France, and it is even rising in some places. In one week, we have erased two weeks of consecutive reductions in cases that we had recorded.”

Figures from CovidTracker show that in the past seven days, an average of 19,770 positive tests have been recorded daily – a rise of 8% on last week.

But the government has appeared reluctant to announce another national lockdown so far, preferring targeted measures for the moment.

Government spokesperson Gabriel Attal said yesterday that people in France must concentrate “all their efforts” on avoiding a third confinement.

He said: “We showed last week in Moselle, and we showed this week in Alpes-Maritimes: as soon as a situation arises, we do not hesitate to introduce measures and make quick, strong, effective decisions.”

But the president of the Nord department said the government should focus on “better distributing” vaccines “between areas that are really under threat and those who are much less threatened [by the virus]”.

He said the 16,700 extra doses sent to Dunkirk were “welcome, but a drop of water in the ocean”.